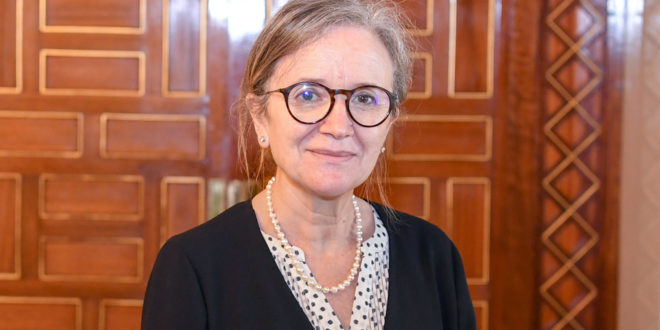 Najla Bouden Romdhane is a 63-year-old geologist with little experience in politics. Critics fear she may not be able to stand up to President Kais Saied. Others celebrate the first female Arab prime minister.

After Wednesday’s appointment of geology professor Najla Bouden Romdhane as the first female prime minister in the Arab World, the 63-year-old is facing mixed feelings in Tunisia.

While some wonder if Bouden could become the symbol of women’s progress and empowerment in Tunisia and the Middle East, others fear that President Kais Saied might exploit her limited political experience to his advantage.

Lina Khatib, director of the Middle East and North Africa programme at the London-based think tank Chatham House, is convinced that choosing a woman was a strategic move by Saied.

“But it remains to be seen whether this is a move towards retaining power in the presidency, while appeasing the public, or towards giving a platform to a competent face from outside the political parties to overcome the fragmentation and weakness that have marred Tunisia’s previous governments,” Khatib told DW.

The past weeks strongly point towards the first line of thought. Only last week, Saied announced that he would begin to act by decree, select a new Cabinet and start to revamp Tunisia’s hard-won 2014 constitution via a committee that he would appoint himself. Under the decree, he also has the power to appoint the PM. Bouden is the first person he has appointed since.

The emergency decree also means that, at least for now, he will remain in a position that would limit Bouden’s political scope.

“By choosing a publicly fairly unknown geologist, Saied raises hopes, since Bouden has never been accused of corruption. However, he also raises skepticism since one might wonder if he selected her as show-off since she is clearly lacking experience in the political field,” Hoda Salah, political scientist at the University of Frankfurt, told DW.

Despite some applause for the new prime minister on social media, it is not just Tunisian women’s organizations that remain skeptical when it comes to forecasting Bouden’s political future.

Former Human Rights Minister Samir Dilou wrote on Facebook: “The decision deserves praise. Is it really a historic moment? Unfortunately not, the symbolism of appointing a woman to this “high” position coincides with the suspension of the constitution and the uniqueness of the president of the republic with pharaonic powers”.

Dilou added that “the pride that Tunisia has always carried when it comes to empowering women and equal opportunities remains tainted by the bitterness of being the head of the government of a country that is undergoing a coup against constitutional legitimacy.”

Some women’s organizations are even more outspoken in their disbelief in Bouden’s political scope.

“The message that is screaming at us is “a woman only gets the job when the job is not important anymore.” It would have been a different story if he appointed her instead of Mechichi or Fakhfakh,” Fida Hammami, the Middle East and North Africa advocacy coordinator at the Women’s International League for Peace and Freedom wrote on Twitter.

The former Prime Minister Hichem Mechichi had been dismissed by President Saied after he had granted himself emergency powers on July 25. Elyes Fakhfakh was Mechichi’s predecessor and had left office in July 2020.

“Kais Saied tokenizing a woman in this particular political context, setting her up to fail and giving her a void mandate is not a symbolic gesture, it’s a farce,” Fida Hammami believes.

Reasons for hope and disbelief

So far, Bouden hasn’t said much in public, and her Twitter account only shows two tweets, one of which says “I am honored to be the first woman to hold the position of prime minister in Tunisia. I will work to form a coherent government to face the country’s economic difficulties, fight corruption, and respond to the demands of Tunisians regarding their natural rights to transport, health, and education.

However, she didn’t say anything in the video message that Saied published to announce the new prime minister.

In Tunisia’s capital Tunis, the opinions vary among women about their new prime minister. “I am very happy with this appointment, based on the principle of feminist solidarity. The first Arab woman in this position is positive, previously, the position was reserved for men,” Olfa Karamosli, a Tunis-based employee, told DW.

However, pensioner Kawthar Al Hammami believes that “it would have been better if the president had appointed a strong man of confidence and integrity, who knows the needs of the people and has the ability to lead the government. That is because women are always in a position of weakness, and Bouden cannot be strong against some people,” she told DW.

Bouden is Tunisia’s 10th prime minister since the 2011 uprising that ousted long-time President Zine El Abidine Ben Ali. Ever since, Tunisia has been at the forefront of Arab countries in terms of women’s rights, granting women full legal equality, ending polygamy and granting them the right to marry non-Muslims or ´dress as they see fit.

However, Saied has not been known as outspoken women’s advocate. Recently, he rejected a bill on women being able to inherit.

“Saied is a very conservative politician and outspoken against the LBGT community, human rights or youth rights but despite the skepticism, it is really important to point out that, overall, it is a wonderful step for Arab women that a woman is the new Tunisian prime minister,” Hoda Salah added.

(*) This article was originally published on DW . Read the original article. The views expressed in this article belong to the author and do not necessarily represent ForMENA