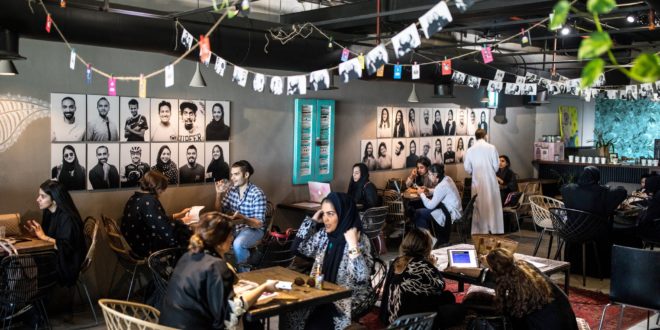 Saudi society is changing. Just take a look at these coffeehouses

As the government relaxes restrictions on men and women working and socializing together, coffeehouses are on the front lines of change.

By Vivian Yee, for The New York Times (*)

“I visited this place and was in a total shock!” Tarak Alhamood, a customer at Nabt Fenjan, a Riyadh coffee shop, raged online recently. “YOU r VIOLATING the rules of this country. I hope this place get closed permanently.”

The blame lay not with the matcha iced tea and flat whites (good, other reviewers opined), the non-dairy milk options (appreciated), the chocolate cake (don’t miss) or the prices (less popular.)

The issue was the decision that made Nabt Fenjan a daring outpost of the new Riyadh: Originally opened only for women, the coffee shop began allowing male and female customers to mix in late 2018.

The move propelled the cafe ahead of the law in the kingdom, where most restaurants and coffee shops are divided, by law and custom, into all-male “singles” sections and “family” sections for women and mixed family groups. Men enter through separate doors and pay in separate lines; women sometimes eat behind partitions to ensure privacy from male strangers.

In early December, however, the government announced that businesses would no longer be required to segregate customers — the latest expansion of the social reforms initiated by the de facto Saudi ruler, Crown Prince Mohammed bin Salman.

Yet Nabt Fenjan was far from the only Saudi establishment to discreetly drop separate sections over the last few years, after the crown prince defanged the religious police, which once enforced conservative social norms. Nor was it the only place to thrive partly as a result.

“I think the reason coffee shops became a trend is because people are more open to change,” said Shaden Alkhalifah, 30, who was studying at Draft Café in Riyadh on a recent evening.

“It has something to do with the current political dialogue,” she added. (And, perhaps, with the many Saudis who have studied abroad in cities with single-origin coffee bean fetishes.)

Notwithstanding Alhamood’s Google pan of Nabt Fenjan, even traditionalists have begun to unbend amid the general loosening-up, in larger cities if not yet in smaller ones or rural areas.

Some women whose families might previously have allowed them to work only in the privacy of offices, if at all, now hold barista jobs. Saudis can now mingle with the opposite sex not only at home but also at movie theatres, concerts and even wrestling matches. Young entrepreneurs are opening places where Saudis can meet like-minded people of both sexes, whether they are artists, filmmakers or entrepreneurs.

The clientele in such coffee shops skews young, reflecting a country where more than two-thirds of the population is under 30 and an unknown proportion is chronically bored. Bars are barred, concerts and movies are just starting to become widely available. Evenings out, therefore, still tend to revolve around food and (non-alcoholic) drink, the more Instagrammable, the better.

For a while, fancy burger joints were everywhere. Food trucks had a long moment. Social media whetted one frenzy after another.

“It’s because we have nothing to do,” said Abdulrahman, an Uber driver in Riyadh, who gave only his first name. “Just these coffee shops.”

What is becoming acceptable in Riyadh is still dicey in smaller Saudi cities. But the changes are en route.

After befriending a woman through social media, Ziyad Abdulrahman, 26, a teaching assistant at an Islamic university in the holy city of Medina, met her in person not long ago at a Riyadh restaurant. It was his first time being alone with a woman in public.

“It was totally fine,” he said. “Actually, I was a little late to this. People have changed.”

Most coffee shops are still gender-segregated. But many have other draws: imported Japanese brewing equipment, Instagrammable tarts and — more intangible, but mandatory nevertheless — good vibes.

Virtually none offer the golden, cardamom-infused Arabic coffee, poured from a curvaceous pot into dainty cups and served to guests with a hillock of dates, that traditionally defined Saudi coffee culture.

Instead, at Draft, which still separates single men and “families,” there are quinoa salads and blond-wood tables illuminated by industrial-style bulbs. And at Medd Café in Jiddah, the Red Sea city where social codes have long been more relaxed than elsewhere, the organic, fair-trade beans are roasted in-house.

On a recent Friday night at Medd Café, the outdoor patio was crowded with young men and women. Many of the women wore their hair uncovered and their abayas open over jeans and sneakers, styling them more like long, fluid jackets than the traditional all-covering gowns.

Still, Riyadh is starchier than Jiddah. It was only after much internal debate that Kanakah, a Riyadh coffee shop that spent three years proudly all-female, reopened last year as a mixed space. Patrons entered through the same door, stood in the same line and ordered from baristas of both sexes.

Khawater Alismaeel, Kanakah’s owner, had noticed that men and women were publicly working together at a few other businesses. If it was not explicitly forbidden, she figured, she might as well try it.

“I wanted to prove that I could do everything on my own with an all-female staff,” said Alismaeel, 23, who opened Kanakah at 19, with help from her family. “Now we’re proving that it’s possible for men and women to work together.”

The change put off some female customers who preferred the old way. Others were scandalized, convinced the cafe had become what one reviewer slammed as a “boys and girls dating spot.”

The changes have unfurled so swiftly that, four months in, she was still not sure whether regulations forbade her from employing female baristas alongside male ones. A municipal health inspector had visited the cafe after a customer complained about the situation, but left them alone.

“I feel lucky to be part of this generation,” she said. “Even five years ago, this wouldn’t have been possible.”

It can still go the other way. Tala Alzaid, 19, a Kanakah barista, used to work with an all-female crew at another coffee shop (“the whole woman-stays-at-home thing is so last year,” she said), but the women were summarily fired in August after a customer complained to the government.

“I mean, equal rights! Why am I being fired when I did nothing wrong?” she said. “When it comes to the government, there’s equality, but in the minds of citizens, maybe it’s not equal.”

With her family’s support, Alzaid had embraced working with men, because “it’s boring otherwise,” she said. “The younger generation accepts change. It’s the older people.”

The young, too, have their demands. Alismaeel plans to introduce more sustainable and vegan-friendly offerings, addressing another complaint from her online reviews.

“They used to have plant milk and vegan” desserts, “but now they don’t!” Shatha Zayd wrote in December. “GET UPGRADED! THE WORLD IS CHANGING.”