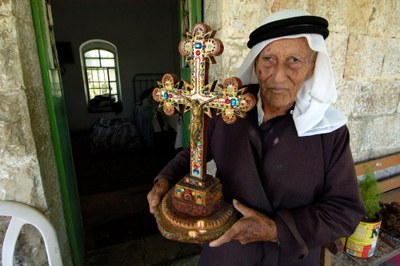 Churches in the Arab world .. expansion and growth

Expansion in Egypt, growth in the Gulf, and looking forward to Saudi Arabia

At an unprecedented pace, Egypt has expanded decisions to build and restore churches during the past few years, while Christian places of worship are increasing in the Arab Gulf states, with an official church aspiration to build the first church in Saudi Arabia, especially after the establishment of the first mass in the Kingdom.

These manifestations radiate an atmosphere of tolerance and respect between religions, and continue in the Arab countries in conjunction with the loud sounds of church bells with joy on the birthday of “Christ”, peace be upon him, on January 7 of each year according to the eastern calendar, while Westerners celebrated it on December 25 .

The Grand Sheikh of Al-Azhar, Ahmed Al-Tayeb, said in a speech at the opening of the largest cathedral in the Middle East east of Cairo in early 2019, that Islam’s position on building churches is “settled, as Islam is a legitimate guarantee for building Christian churches, and this is an indisputable legal ruling.”

In December 2020, Al-Tayeb responded to questions about the ruling on building churches, stressing that “Islam is not against building churches, and there is nothing in the Qur’an or the Prophet’s Sunnah that forbids this,” according to local media at the time.

On August 30, 2016, the Egyptian Parliament finally approved a law for building and renovating churches, with the welcome of the three main churches in the country: Orthodox (the most numerous), Catholic and Evangelical.

The law stipulated the formation of a committee headed by the Prime Minister, whose membership includes ministers, the competent technical and security authorities and the representative of the concerned community, unlike what was previously practiced, which was satisfied with prior security approval only for construction or restoration.

The committee was formed and began receiving requests in January 2017 until September of the same year, and issued its first decision in May of the following year.

This number, according to observers, is unprecedented in recent years, as the sect took a short period of time to obtain a restoration license, in light of the atmosphere in Upper Egypt (south) that witnessed crises regarding places of worship, but it decreased remarkably in conjunction with the application of the law.

The Coptic Pope of Egypt, Tawadros II, said in televised statements on November 14, 2021, that one of the “distinctive stations he went through was the issuance of the law on building churches in 2016,” considering it “a very important and positive step in looking at the citizens of Egypt with a view to one”.

In January 2019, Egyptian President Abdel Fattah El-Sisi inaugurated the Nativity of Christ Cathedral, the largest for Orthodox Christians in the Middle East, east of Cairo.

The Egyptian Church has not announced the numbers of its Copts over the past years, but Pope Tawadros II, since he took office on November 2, 2012, has stated in more than one statement that their number has reached 15 million. At that time, Egypt’s population exceeded 91 million, and it is currently estimated at 104 million.

The first mass in Saudi Arabia

Coptic churches are present in various Arab countries, especially the Gulf countries, most notably the UAE, the Sultanate of Oman, Bahrain, Kuwait and Qatar, according to the Coptic Pope of Egypt, in a television interview, on December 6, 2018.

In late 2018, Saudi Arabia witnessed the establishment of the first mass (prayer), without official comment from Riyadh, amid ecclesiastical aspiration to build the first church in the Kingdom.

In the church’s first comment on the establishment of a mass in Saudi Arabia, Pope Tawadros II said, in the same interview, that “this step came in order, and was positive and good, according to the new developments that the Kingdom is witnessing to keep pace with the times.”

He expressed his aspiration to build the first church in Saudi Arabia, saying: “I don’t know the nature of the conditions there, but why not… what prevents (?) There are neighboring Arab countries that have churches.”

He explained that Saudi Arabia receives thousands of Egyptian workers, including Christians, and therefore “the Kingdom’s provision of places of worship for them is a very beautiful thing.”

The liturgy was a rare event in Saudi Arabia, which forbids building churches for religious considerations, and was held by Anba Morcos, Metropolitan of Shubra al-Khaimah (north of Cairo) during his visit to the Kingdom at the invitation of the Saudi Royal Court, according to local media at the time.

The mass was held, according to media reports, in a chalet hall in the capital, Riyadh, and was attended by dozens of Copts.

About a year before this mass, in November 2017, Saudi Arabia received the Lebanese Maronite Patriarch, Mar Bechara Boutros Al-Rahi, in the first historic visit of a Maronite patriarch to the Kingdom, which represented an unprecedented openness.

The largest cathedral in Bahrain

In the presence of a representative of the country’s King Hamad bin Isa, Bahrain inaugurated on December 10, 2021 the Cathedral of Our Lady of the Arabs, the largest Catholic cathedral in the Gulf region on an area of ​​9,000 square meters, and with its external courtyards, it can accommodate about 8,000 people.

In his speech during the opening, Abdullah bin Hamad Al Khalifa, the King’s representative, said that “the Catholic Church is the largest cathedral in the Arab Gulf region, and fulfills the Bahraini monarch’s vision of the rapprochement between religions and cultures,” according to the official news agency.

The construction of the church began in February 2013, and before its opening there were 19 registered churches in Bahrain, half of them in the capital, Manama.

Christians make up about 14.5 percent of Bahrain’s population, including about 80,000 Catholics, most of whom are workers from India and the Philippines, according to local media.

The day after the opening, the cathedral witnessed the first mass prayer. Pope Francis sent a letter to the King of Bahrain, thanking him for this step.

The Apostolic Vicar in Southern Arabia, Archbishop Paul Hender, said that “the King hopes that Pope Francis will visit the country.”

In February 2019, Pope Francis visited the UAE, becoming the first pope to visit the Arabian Peninsula, as part of his participation in a conference for interfaith dialogue. He was received by the Crown Prince of Abu Dhabi, Sheikh Mohammed bin Zayed Al Nahyan, and Sheikh Al-Azhar Ahmed Al-Tayeb.

(*) This article was originally published on The Global Frontier. Read the original article. The views expressed in this article belong to the author and do not necessarily represent ForMENA