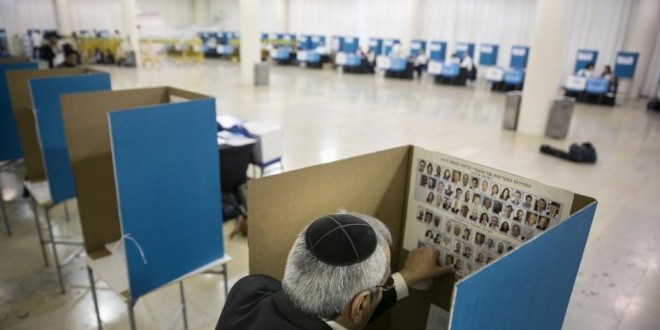 The Israeli elections are fast approaching. The provocative speeches and shocking actions of major candidates reveal and further stoke the flames of the battle for control of a country riven by internal discord and beset by external pressures. With final polls leaving the outcome uncertain, the best commentators can hope to do is survey the trench lines over which the election will be won or lost.

Zionism of the Left and Right

Whatever fears of existential threats Prime Minister Benjamin Netanyahu expressed to the United States Congress, he returned to an Israel assured of its status as an established nation-state. The primary purpose of Zionism – to establish a Jewish homeland in Palestine – was achieved in 1948. For many, including several prominent historians and politicians, this raises a fundamental question: what is the role, if any, of Zionism today?

For some, the most important function of Zionism today is to preserve the state at all costs. This is the position, for example, of previously left-leaning historian Benny Morris, who swung decisively to the right with the wider radicalisation of Israeli society post-2000. For Morris and others like him, the emergence of a Zionist left list – represented most prominently by Herzog’s Zionist Union Party – is a cause for concern.

What then, has become of the socialist ideals which characterised previous incarnations of Zionism? For many early migrants, it was these principles which gave Zionism ideology much of its beauty and appeal. But today, all the Kibbutzhave been privatised. What better symbol is there of Zionism’s transformation?

Indeed, Zionism’s right-wing, nationalist aspects – which have only grown since the conquests of land in 1948 and 1967 – have all but erased these socialist and humanist ideals. Beyond this hardline ideology, Israel has become just like all other contemporary modern societies embedded in globalisation, nothing more and nothing less. Earlier leftist collectivism has given way to ultra-liberalism (economically speaking) and individualism.

The “new historian” Tom Segev, known for his work on the Six-Day War, has written on such matters.  “At the time [of the War],” he recently commented, “I thought and I wrote that Israel was moving towards post-Zionist society. I was wrong. It has evolved into a more Zionist society”.

To revive itself, the Israeli left has to engage with the severe socio-economic issues affecting Israelis. By rediscovering alternative understandings of Zionism, they may be able to make Israel a state for all its citizens. Indeed, as I wrote in a previous article, the outcome of the election may depend on whether socio-economic problems can replace defence and security as the pre-eminent topics of party debate.

For decades, the priority of Israeli governments has been – often legitimately – the security of Israelis, who often feel assaulted or even under existential threat. Netanyahu’s speech to Congress can be seen as an attempt to maintain this focus at the expense of domestic socio-economic problems. As I have arguedelsewhere, this may be counter-productive for Israel in the long-term.

Nonetheless, Netanyahu has made consistent efforts to present Iran as Israeli’s number one enemy, above historical threats and new actors such as Da’esh (the Arabic acronym for the “Islamic State”). Iran is said to be at the centre of a “Shia axis”, whose tentacles extend along the Lebanese border into the Golan Heights and now penetrate Gaza.

This is not a new tactic: the Israeli Prime Minister emphasises the threat from the Islamic Republic at every election, including the American in 2012 and now ahead of Israel’s on 17th March. For Netanyahu, Iran is the heart of the hydra, financing Shia militias and pursuing a military nuclear programme which, the Prime Minister claims, would undoubtedly be directed against Israel at the earliest opportunity.

With the election looming, much will depend on whether the public shares the Prime Minister’s concern of Iran and his prioritisation of external threats over domestic issues.

Right against centre-left: the power of the extremes

According to the polls, Netanyahu’s right-wing Likud (23 seats projected in the Knesset) and Livni and Herzog’s, centre-left Zionist Union are neck and neck. Established parties, such as Lieberman’s Yisrael Beiteinu appear marginal (5 seats projects).

But in this highly political landscape, shifting from one election to another, alliances are made and broken as key figures create, join or defect from different factions. Livni is a case in point, having tried everything from right to centre-left. Having started out as a member of Netanyahu’s Likud, Livni switched to Kadima, the party of Netanyahu’s great rival, Ariel Sharon, before running for Zionist Union with Herzog. She has also served as Netanyahu’s Minister of Justice and representative for the peace process.

As for the current Foreign Minister, Avigdor Lieberman, whose inflammatory anti-Arab speeches have caused multiple scandals in Israel and beyond, he knows what he must do: if he wants to hold a prominent position in the next government, such as Minister of Defence, he must join an anti-Likud alliance.

The smaller parties which can make or break the election outcome are Yesh Atid Yair Lapid, who have cold relations with both Netanyahu and Lieberman, and of course Naftali Bennet’s far-right Jewish Home, on course for around twelve seats. Although the left-wing, secular party Meretz has pledged “unconditional” allegiance to Herzog’s centre-left block, it carries little weight, with just five seats projected.

At least as much as appeal to the electorate, the next government will be formed by whoever can best navigate the shifting sands of Israeli party politics to form a majority in the Knesset. Worryingly for the centre-left, it appears that the far-right are best placed to act as king-makers.

The greatest hope for Zionist Union may therefore be to seek an alliance with Arab parties. Centred on the Hadash communist party, the united Arab list is projected to win thirteen seats.

While the Israeli electorate are extremely volatile and one can never be sure of election results prior to the event, it is clear that the radicalisation and rightward drift of Israeli politics over the last fifteen years and under Netanyahu is not unopposed. Against the nationalist and religious Zionist supporters of colonisation and opposition to the establishment of a Palestinian state, there is something of a resurgence of the left and centre-left.

Notwithstanding Herzog’s confidence that his alliance with Livni will be enough to oust Netanyahu, it seems certain that the Arab vote will weigh more than ever. However, since the failure of the Camp David talks in 1999, the Arab-Israeli population have turned their backs on Israeli centre-left parties, for whom they traditionally voted before this perceived betrayal.

Much therefore hinges on whether the rise of the extreme right will push the Arab list into a coalition with the Israeli centre-left. Such an alliance is essential for the return of Israeli Arabs – 20% of the country’s total population – to political affairs. It is this potential alliance which of which Netanyahu is most afraid.

Neglect of economic and social issues

The Netanyahu government has failed to solve the serious economic and social crisis in the country. The few measures taken in 2011, after the biggest demonstrations in Israel’s history, have been ineffectual.

The outgoing Prime Minister has no real economic and social program; neither do his opponents on the centre-left. This neglect is caused – or perhaps merely legitimated – by the unstable regional situation following the Arab uprisings of 2011, which has been used to justify a disproportionate focus on security.

Under such conditions, the defence budget consumes 20% of state spending. Yet, in the face of heavy cuts elsewhere, it has remained immune and any questioning of such expenditure has become a taboo.

As long as such a large proportion of state revenue is spent on defence, it is difficult to imagine any solution to economic and social problems or a rebuilding of Israel’s welfare state. The elections, unfortunately, will not change anything in this regard.

The Palestinian question: a deafening silence

Despite the two main rival camps being neck-and-neck, it is almost certain that neither will promise to resume peace negotiations. Labour’s list is primarily Zionist. It is also worth remembering that the Israeli left blames its own demise in the 2000s on having trusted the Palestinians. At the same time, Labour Zionism was responsible for the original expulsion of the Palestinians in 1948, the Six-Day War and in 1967. Indeed, leftist parties conducted the colonisation of Palestine from the outset, until the last Labour Prime Minister, Ehud Barak, joined Netanyahu’s nationalist coalition in 2003.

The prospects of an alliance between Arab parties and the Israeli left, which it may seem to make political sense, are thus uncertain, to say the least. As the election approaches, tensions are rising. Palestine’s application to the International Criminal Court, Israel’s suspension of tax revenue payments to the Palestinian Authority, the arrest of Hamas officials in the West Bank – all point to the swift deterioration of relations since 2014’s “Operation Protective Edge”.

In the weeks leading up to the election, the Palestinian issue has been covered by a spell of silence. Netayahu’s experience in non-negotiations; the rise of Herzog’s block over the old centre-left led by Yair Lapid; the emergence of throwaway parties which rarely last from one election to another; the attempts of civil society actors to disrupt the dominance of the politic-military establishment; whatever attention has been paid to socio-economic issues: Palestinians remain the primary victims of the Israeli electorate’s decision to vote on the basis of security concerns again and again.

Sébastien Boussois is a policy adviser for ForMENA and author of several books. His most recent work is “Israel within Four Walls: the security complex against the Arab Spring” (Grip Editions, Brussels)
Share