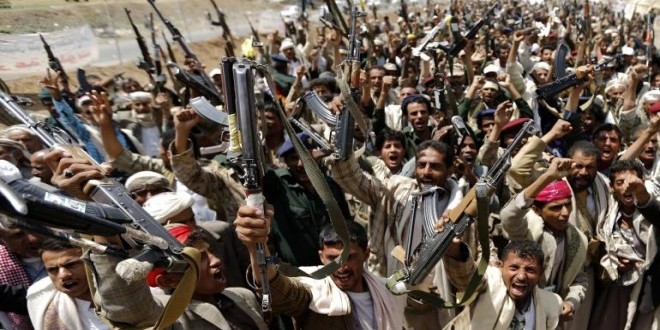 Coup or Revolution? The Houthis play Snakes and Ladders in Yemen

Nearly four years have passed since the people of Yemen, along with those of much of the rest of the MENA region, took to the streets en masse to demand human dignity and popular sovereignty. Now, having shelled the home of President Hadi and provoked a governmental crisis through his and his cabinet’s resignation, armed Houthi militia occupy the capital and hold the (ex?) leadership under house arrest.

Conflicting narratives present such recent dramatic events as either a legitimate continuation of the revolutionary uprising of 2011 or, alternatively, a unilateral and despotic seizure of power through a violent coup d’état. Both of these labels contain elements of truth; both are similarly reductive. Taken alone, each obscures more than it reveals about a situation which is complex, uncertain and deeply unstable.

Now more than ever, Yemeni politics is characterised by ill-defined factions and factions within factions, all manoeuvring within a constantly shifting web of Machiavellian dealings and deceit. Ali Abdullah Saleh, Yemen’s president of over thirty years before his (partial) ousting in 2011, had many failings, but a flair for analogies was not among them: governing the country, he once said, was like “dancing on the heads of snakes”. Over the past four years, everyone has been straining to climb the ladders to the top, while nervously trying to dance past the serpents below.

Neither pure revolution nor straightforward coup, the Houthi seizure of Sana’a and Northern Yemen must be understood within the logic of this game: a power-play in the multifaceted struggle to manipulate, monopolise or potentially transform the post-2011 state. It is at once both an expression of legitimate popular demands and, through its militarised trajectory, a threat to those same aspirations.

This dual nature makes the Houthi rebellion resistant to simplistic language. With one-sided definitions futile, the best we can currently do is to try to untangle the interlocking domestic, regional and global factors feeding into the crisis.

Democracy versus the Deep State

During the 2011 protests, the Coordinating Council of the Youth Movement of Change (CCYMC) issued a set of thirteen demands which it considered essential for a transition towards democracy. Top of the list was the insistence on the “removal of the current regime peacefully and removal of all its figures and all members of the President’s family and his relatives from all leadership posts in the military and civil institutions”.

The (still largely unmet) demand is instructive, hinting at Yemen’s version of what is known as the “shadow state” in Iraq and the “deep state” in Turkey: a parallel and partially hidden nexus of personal connections running through, across and beyond the formal institutions of state. Often contradicting official hierarchies of accountability and command, it is in these submerged lines of clientalism and patrimony that real power is vested. Fuelled by the centralised and top-down “rentier” economy of oil and aid, in Yemen as elsewhere the “deep state” is highly resistant to change – regardless of how accurately the visible institutions and mechanisms of government can be made to mimic the formalities of liberal democracy.

The post-2011 period has placed this entrenched power matrix at the centre of two partially overlapping, yet fundamentally contradictory, struggles. First, as the source of profit and power, the state itself remains an object of elite competition and desire. Factions in (official or unofficial) command of key ministries guard their positions of influence and wealth; others – necessarily excluded – try to gain access, whether through shadowy manoeuvre or frontal assault. In this game of Realpolitik, the Shia Houthi notables are pitted against those elements of the ancien regime which moved against Saleh in 2011, including President Hadi himself, parts of the military-security apparatus, the conservative Sunni Islah movement and the cross-sectarian Hashid tribal confederacy, headed by the powerful Ahmer family.

Secondly, a loose coalition of youth groups, civil society activists and a handful of progressive parliamentarians envision a fundamental transformation – rather than simply a despotic redistribution – of political power. Imagining a new democratic order (whether bourgeois-liberal or radical-revolutionary), this struggle demands nothing less than the dismantling of the deep state and the subordination of public institutions to popular will. Meanwhile, the poor and powerless can do little but attach themselves to whichever factions offer the best chance of short- to mid-term stability and survival.

The Houthi rebellion operates simultaneously on both of these conflicting axes. On the first, it appears as a coup, pure and simple – or at least, as a demonstration of hard military power by a faction seeking better seats at the banquet table, having initially been excluded from the GCC-brokered “National Unity Government”. Designed both as a means to demobilise the revolutionary masses and preserve the structures of the deep state, this deeply conservative administration was formed entirely of Saleh’s old General People’s Congress (GPC) and the “loyal opposition” of the last thirty years, the Joint Meeting Parties (JMP). By proving themselves militarily superior to the central state, Houthi elites on the most basic level hope to gain access to its financial and political resources.

Increasingly however, it seems that such tactics may be part of a wider strategy, driven by the ousted Saleh himself. Leaked tapes appear to show the ex-President directing Houthi militia against his successor, Hadi. In apparent confirmation of this alliance, while all other parties boycotted the Houthis’ dramatic declaration of a deadline for the formation of a new government, representatives of Saleh’s GPC not only attended the speeches (held in an occupied government hall), but greeted them with rapturous applause. The Houthi militias thus appear as the junior partners in a counter-revolutionary coalition created both to bring Saleh – most likely through his son – back to power and abort whatever remains of Yemen’s democratic experiment. The “Houthi coup” is, according to this reading, part of a wider attempt to finally crush the revolution and return to the status quo ante.

On the other hand, it cannot be denied that the Houthi movement has gained significant support from the population at large, not limited to their tradition tribal or religious power-base. As documented by an in-depth report from the International Crisis Group (ICG), this support has been gained through advocating “popular positions, including a federal state based on democratic principles, political pluralism, religious freedom and balance of power”. The same report details how this rhetoric has allowed the Houthi to appeal to many “women, liberal-leaning youth and civil society activists” – that is, a significant section of the most prominent and progressive voices both in the 2011 protests and the National Dialogue Conference (NDC) of 2013. Local populations, meanwhile, appreciate the Houthis’ ability to provide welfare and maintain order in the areas under their control. These civil society and subaltern groups all, to varying degrees, lack economic, political, social and cultural capital. They therefore need the muscle provided by armed militias, even as their emancipatory aims are threatened by that same militarised power and the escalatory logic it imposes on struggle.

Up to now, the contradictions between these two strands of the Houthi movement have remained largely hidden through the common factor of shared opposition to a governing elite which is still seen by many as corrupt and self-serving. However, there is a sense that the Houthi militias may have overplayed their hand by stepping into positions of power in which they will be held directly accountable. Indeed, it has been suggested that Hadi’s resignation was an unwelcome surprise to the Houthi leadership, who sought to impose their agenda on the incumbent, rather than immediately replace him. The President’s move may thus have been a gamble, designed to split the Houthi’s military wing from its civil-democratic support – in order to crush both and re-establish central authority.

This already confusing domestic situation is further complicated by regional actors and the role of the United States. Speculation is rife that the Houthi are armed and funded by Iran; similarly, according to MERIP, conservative Sunni groups are supported by Saudi Arabia. While the specifics of such claims are hard to verify, it would indeed be surprising if two of the region’s major powers were not in some way attempting to turn Yemen’s crisis to their own advantage. If so, the country represents the latest proxy site of the growing Saudi-Iranian “Cold War”, the dominant and unifying feature of which is an attempt to reverse the revolutionary gains of recent years through the imposition of a militarised and sectarianized logic that works in both countries’ favour.

In contrast, the major way in which the United States has contributed to recent events thus far appears to have been through inertia – although whether this is through absentmindedness or tactical intent is harder to say. The continuation of the long-standing campaign of drone strikes in Southern Yemen has, according to Chatham House, been one of the primary reasons for the Yemeni government’s lack of legitimacy in the eyes of its population – which, as noted above, has contributed to the Houthis’ wider support.

However, since the emergence of the Islamic State, the US has redirected resources to Iraq and Syria, leading to a significant reduction in drone operations in Yemen. At a time of falling oil revenues and post-2011 elite fracture, this relative decrease in American military power has further eroded the capacity of the central Yemeni state – opening up opportunities for both the Northern Houthi and the Southern separatist movement, who now work in a tacit alliance. The American government have also made their priorities clear by swiftly declaring their willingness to work with Houthi militia. What they desire is not primarily Yemen’s democratic transformation, but the emergence of a strong central government capable of working as its partner in the “War on Terror”. US willingness to turn a blind eye to Iranian influence may also be tied to a wider rapprochement, represented most obviously by the ongoing “5+1” nuclear negotiations. If so, the counter-revolutionary Saudi-Iranian “Cold War” is but the latest reactionary conflict in which the US effectively backs both sides.

The hopes of the 2011 protest movement, in Yemen as in much of the rest of the region, seem further away than ever. Those still struggling for democratic rights and a basic level of material security need all the help they can get. But with a self-serving domestic elite, a regional geopolitics defined by covert conflict between its major players and the world’s only superpower indifferent (at best) or actively hostile towards popular aspirations, it is not clear where this help can come from.

Unfortunately, the most likely outcomes for Yemen, in the short- to mid-term at least, do not look promising. In order of descending desirability, they run as follows: a power-sharing agreement among elite factions, perhaps with a façade of democracy for the benefit of PR relations with the “international community”; a return of a partially reconfigured ancien regime in the form of a Saleh-Houthi-US alliance; a collapse into a Syria-style civil war, in which the field is blown completely open for outside actors to advance their own interests.

In all three scenarios, democracy seems set to lose out once again to the deep state, the domestic, regional and international backers of which seems so intent on dominating Yemen that they are prepared to see it destroyed.