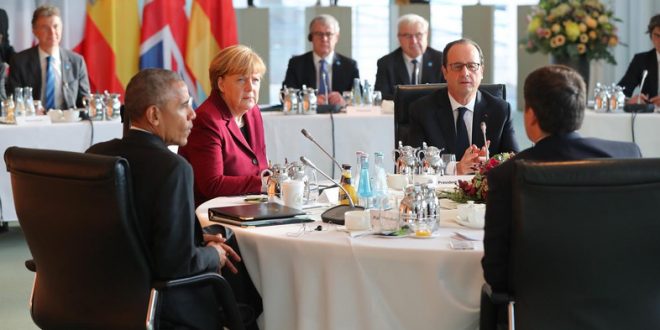 (From left) US President Barack Obama, German Chancellor Angela Merkel, French President Francois Hollande and Italian Prime Minister Matteo Renzi wait for the beginning of their meeting at the German Chancellery November 18, 2016 in Berlin, Germany. European leaders headed to the German capital to seek assurances from US President Barack Obama on the course that Donald Trump might take, given the populist mogul's pledges to shake up the world order. The meeting between Obama and the leaders of Britain, France, Germany, Italy and Spain is the first of its format since Trump's election. / AFP PHOTO / POOL / Kay Nietfeld

By: By Remi Benoit Piet, for Al Arabiya English (*)

The unexpected election of Donald Trump to the White House, as well as his unpredictable personality, have led to a series of worried reactions around the world and in particular among traditional American allies in Asia and Europe. During the campaign, Trump regularly mentioned his support to a revamping of the American security doctrine, calling for a disengagement of US military forces and a shuffling of traditional alliances.

The Japanese Prime Minister Shinzo Abe was the first head of state to travel to Washington on Thursday in order to clarify the new security strategy likely to be implemented during the next Administration. Similarly, South Korean President Park Geun-hye was eager to get confirmation that the United States would maintain a military presence to contain North Korean belligerence. If Trump’s answers seemed reassuring, a growing debate has emerged in both countries in regards to the need to ramp up their own military capacities.

A similar reflection has been engaged by European leaders gathered on Monday as they adopted a new “defense roadmap” which highlighted the need for Europe to develop a “strategic autonomy”. In the eyes of the European Union, the threats are twofold. First, a drastic change of the American position towards Russia in the light of the stark contrast between Obama’s constant assertiveness towards Moscow and Trump’s campaign speeches hinting at a strategic alliance with Putin. Barack Obama’s last visit in Europe yesterday (on Friday) confirmed the hard stance towards Russia as European leaders joined Obama to reaffirm economic sanctions decided since the annexation of Crimea by Russia. Yet the American support to this strategy is likely to be reversed in the coming months.

The second threat for Europe is the possibility of a gradual disengagement of American forces from conflict zones around the world. Trump has regularly defended a more isolationist foreign policy than his predecessor and the European Union therefore needs to establish an enhanced continental cooperation on military affairs. If Federica Mogherini called this week for the establishment of a “principled global security provider, a superpower that believes in multilateralism”, the reality of defense cooperation in Europe is much less ambitious.

The European Union today is present in 17 conflict areas around the world, six under a military operation mandate and 11 to carry out a civilian mission. For each of those however, the EU has struggled to reach an agreement between its members to gather the necessary funding. The decisions taken on Monday would significantly help their coordination within a common permanent structure. In parallel, the European partners vowed to develop common research programs to enhance the interoperability of materials thanks to a dedicated industrial strategy.

If those declarations of intention have a feeling of déjà vu, the calls for a Defense Union within the EU enjoy more echo than in the past. The election of Trump strengthens a momentum initiated by the Brexit vote and the decreased influence of a British government regularly adamant to limit further European integration in the political and security realm. For London, the creation of a permanent defense institution was an unwelcome addition as it would potentially compete with NATO and infringe on national sovereignty.

Yet, with the decrease of the British influence, France and Germany have stepped up their military cooperation. While London had developed privileged research collaboration with leading French military companies, its political position was intransigent when it came to going beyond technological developments.

Germany, however, is a less reluctant partner and the summit on Monday aimed at preventing in the future unfortunate decisions such as the purchase from the Polish government of American helicopters instead of the ones manufactured by the European consortium Airbus. It will be interesting to see if Warsaw maintains its ideologically motivated decision now when the White House will adopt a far less assertive position towards Russia.

The nomination of Michael Flynn as the main National Security advisor, a general obsessed by the crushing of extremists and open to the idea of deep collaboration with Russia, is a further incentive for Eastern European countries to support the development of an autonomous European structure with dedicated funding. If such is the case, the United Kingdom would lose some of its most precious allies in the prevention of a European body that would step on NATO’s turf. Despite the denegation of the British Defense Ministry, the United Kingdom has started to drift away from the center of European collaboration on defense and security.

A close cooperation between European states in a joint military effort can be more than successful. Last Thursday, the European space shuttle positioned four new satellites in orbit which will allow the initiation of the 100 percent European Galileo navigation system. This technological development will free Europe from the American military conceived GPS system and will allow European countries to develop their own military strategy based on proprietary data, instead of going through the United States every time. The British departure from the EU might end up being a good opportunity to reassess the EU’s military strategic choices and to develop a strong and ambitious security agenda in the Middle East.