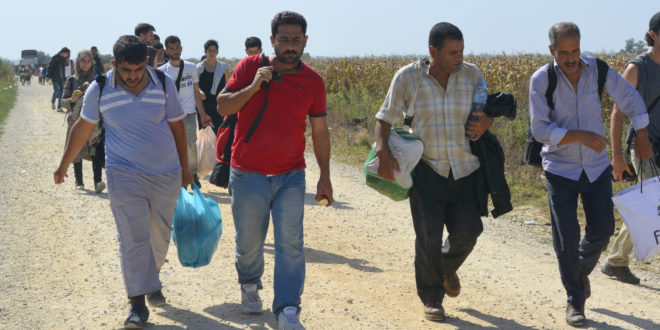 Syrian refugees have become pawns in their host nations’ politics

As the number of refugees globally reaches records, states are developing diverse yet similar strategies of linking their management of forced displacement to foreign policy goals. In May, Iran’s deputy foreign minister, Abbas Araghchi, said that if crude exports continue to decrease in light of American sanctions, “it is possible that we ask our Afghan brothers and sisters to leave Iran.” In September, Turkey threatened to open the border with Syria and allow internally displaced Syrians into its territory if President Bashar al-Assad’s regime launched its “massive offensive against Idlib.”

The manipulation of forced migration as a political strategy is evident across a growing number of countries. In the past two years, Lebanon, Kenya, Pakistan and Jordan all employed their status as host states of refugees to make demands toward Western states and international organizations.

My research explores how three host states — Jordan, Lebanon and Turkey — have leveraged their population of Syrian refugees for political advantage. I found the emergence of a new type of state — a refugee rentier state — where those in positions of economic or political authority adopt policies extracting revenue from other state or nonstate actors in exchange for maintaining refugee groups within its borders.

A history of refugee rent

Examples of states engaging in refugee-rent-seeking behavior abound. Turkey was able to secure an unprecedented sum of 6 billion euros in 2016, as well as other concessions, in return for keeping Syrian refugees within its borders. In 2010, the European Union agreed to pay Libya 50 million euros after Moammar Gaddafi’s threat that he would “turn Europe black” otherwise.

Ethiopia negotiated a $500 million aid packet this year in light of its status as a host state of almost 1 million refugees. Manus Island and Nauru received more than $5 billion from Australia between 2012 and 2018 to continue serving as offshore processing centers for asylum seekers — an astronomical sum, considering Nauru’s annual gross domestic product is $114 million. Lebanon forged a 400 million-euro partnership with the E.U. in 2016, aiming to address living conditions for Syrian refugees as well as Lebanese citizens.

There are arguably two main types of refugee-rent-seeking behavior. States may adopt back-scratching strategies that rely on interstate cooperation. Or states might choose a blackmailing approach based on coercion. The former, involving pleas for international assistance and appeals to norms and international law, are in sharp contrast with the latter, which frequently entail threats of unilateral action.

Jordan’s management of Syrian refugees is a clear example of back-scratching. The royal family and state ministers made repeated calls for international economic aid but never suggested that they would force Syrians out. “In a country of 6.6 million Jordanians, we have opened our doors to 1.3 million Syrians,” Queen Rania said at the 2016 U.N. summit on refugees and migrants, adding that “it cannot fall to the countries closest to the conflicts to shoulder this responsibility alone.”

A blackmailing strategy is easier to identify. During the February 2016 negotiations of the E.U.-Turkey deal, Turkish President Recep Tayyip Erdogan said: “We can open the doors to Greece and Bulgaria anytime and we can put the refugees on buses. … So how will you deal with refugees if you don’t get a deal? Kill the refugees?”

How does a state choose a strategy?

The recent policies of Iran and Turkey make sense once conceptualized as a blackmailing refugee-rent-seeking behavior: Iran’s 3 million refugees constitute a means of putting pressure on the Afghan government and, by extension, on Washington. Iran may have even tried to target Turkey, to where most deported Afghan refugees would have fled. In the Turkish case, the pro-regime Daily Sabah newspaper went as far as to publish a map that visualized which European countries would be most affected by a new wave of Syrian refugees if Assad went ahead with an attack on Idlib.

Refugee rentierism is here to stay

International trends suggest this will continue: Western states’ traditional reluctance toward hosting migrants and refugees has grown exponentially across both sides of the Atlantic. It feeds into “out of sight, out of mind” policies that reward host states of first asylum for serving as buffer zones against asylum seekers — from the Middle East and North Africa to Mexico.

The global shift toward the commodification of forced migration is not lost on the host states. A few weeks after the 2016 E.U.-Turkey deal, Kenya’s national security head threatened to close down the Dadaab refugee camp, one of the largest in the world, saying the West had been getting away with it “on the cheap.” Looking back at how they dealt with the Syrian refugee crisis, a Jordanian official said that “we should have blackmailed the E.U. like Turkey did.”

But refugee-rent-seeking strategies are no longer limited to the Global South. In 2015, Greek Foreign Minister Nikos Kotzias said that if Greece was forced out of the euro zone, “there will be tens of millions of immigrants and thousands of jihadists” flooding Western Europe.

The rise of refugee rentierism suggests that analyses of power politics are incomplete if they do not take forced migration into account — not necessarily as weapons in terms of “new wars” but as instruments of diplomatic negotiations and leverage, as part and parcel of the international system.