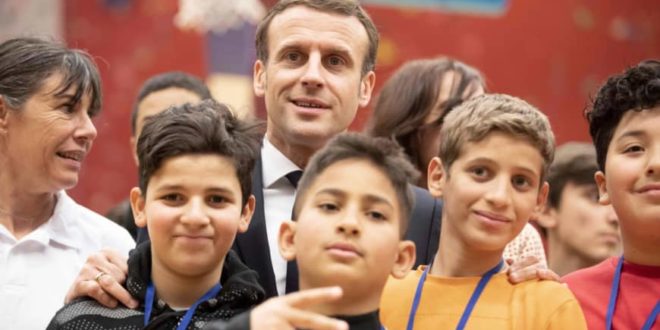 French President Emmanuel Macron on Tuesday announced measures to end a programme that allowed foreign countries to send imams and teachers to France in a bid to crack down on what he called the risk of “separatism”.

During a visit to the eastern French city of Mulhouse, Macron said the government sought to combat “foreign interference” in how Islam is practiced and the way its religious institutions are organised.

“A problem arises when, in the name of religion, some want to separate themselves from the Republic and therefore not respect its laws,” he said.

Macron plans to end a programme created in 1977 that allowed nine countries to send imams and teachers to France to provide foreign-language and culture classes that are not subject to any supervision from French authorities.

Four majority-Muslim countries – Algeria, Tunisia, Morocco and Turkey – were involved in the programme, which reaches about 80,000 students every year. Around 300 imams were sent to France every year by these countries and those who arrived in 2020 will be the last to arrive in such numbers, said Macron.

The government has asked the French Muslim Council (CFCM), the body representing Islam in France, to find solutions to train imams on French soil instead and ensure they can speak French and do not spread Islamist views.

The measures were part of a much-anticipated intervention less than a month before municipal elections in France. Macron’s speech came at the end of a visit to Mulhouse, home to a large Muslim community that has been the focus of the French government’s campaign against Islamism.

The new rules were intended to counter Islamic extremism in France by giving the government more authority over the schooling of children, the financing of mosques and the training of imams, said Macron.

“This end to the consular Islam system is extremely important to curb foreign influence and make sure everybody respects the laws of the republic,” he told a news conference in Mulhouse.

‘We cannot have Turkey’s laws on France’

The scrapping of the programme granting countries the right to send imams and teachers to France would instead be replaced by bilateral agreements to ensure French state has control over the courses and their content starting in September.

France had agreements with a number of countries, including Algeria, Morocco and Tunisia, said Macron. But the only country with which France did not reach a bilateral agreement was Turkey.

“Turkey today can make the choice to follow that path with us or not, but I won’t let any foreign country feed a cultural, religious or identity-related separatism on our Republic’s ground,” he said.

“We cannot have Turkey’s laws on France’s ground. No way,” Macron added.

Turkey runs a vast network of mosques inside the country and abroad under the powerful Diyanet, or Directorate of Religious Affairs. Under President Recep Tayyip Erdogan, the Diyanet budget has dramatically increased amid criticism that the body was being used by Ankara as a foreign policy tool and an attempt to extend Turkey’s soft power.

Home to Europe’s largest Muslim community, estimated at around 6 million, or 8 percent of the population, France has long sought to assimilate its Muslim nationals and residents in a country that holds fast to laïcité, or state secularism, a 1905 legal principle that separated church and state and mandated the state’s neutrality on religion.

France has suffered major attacks by Islamist militants in recent years. Coordinated bombings and shootings in November 2015 at the Bataclan theatre and other sites around Paris killed 130 people – the deadliest attacks in France since World War Two. Most of the attackers were French or Belgian nationals who had travelled to Turkey and from there to Iraq and Syria to fight with the Islamic State (IS) group.

Fighting ‘separatism’ or communities governing themselves

Addressing the issue of “separatism”, Macron warned of the dangers of “communitarianism” or the practice of communities governing themselves in France. He called for better integration of Muslims in wider society.

“We are here for a reason that we share with Muslims – that is the struggle against communitarianism,” he said. Macron insisted the new measures were not anti-Islam, but were designed to aid the integration and provide opportunities for France’s Muslims.

“What we must put in place is not, as I have sometimes heard from some people, ‘a plan against Islam’. That would be a profound mistake,” said Macron. “What we must fight is the separatism, because when the Republic does not keep its promises, others will try to replace it.”

(*) This article was originally published on France24.  Read the original article. The views expressed in this article belong to the author and do not necessarily represent ForMENA