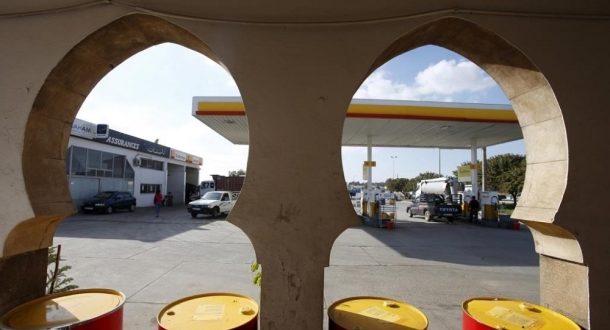 Corruption continues as institutions and political rights weaken in MENA

The Corruption Perceptions Index 2018 presents a grim reality in the Middle East and Northern Africa where, despite some incremental progress by a select few, most countries are failing in the fight against corruption.

With a score of 70, United Arab Emirates (UAE) leads the region on the CPI, followed by Qatar (62).

At the very bottom of the region, Syria scores 13, followed by Yemen (14) and Libya (17). Both Syria and Yemen are also in the bottom five of the entire index. 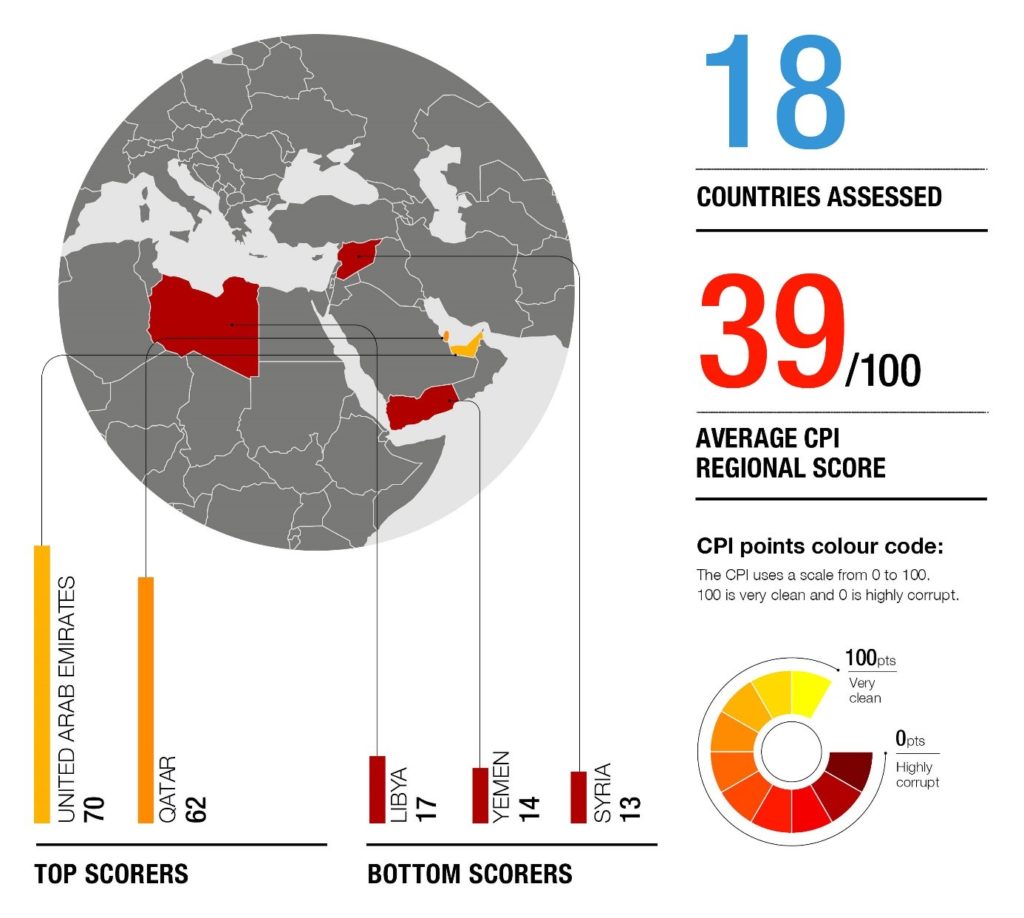 Corruption and a crisis of democracy

In a region where any attempt at democratisation proves an impossible mission, civil liberties are under suppressive state control and the social contract between states and their citizens has been broken for decades, it is no surprise that corruption remains stubbornly high.

Political corruption remains a central challenge, despite the work of many governments across the region to focus their national priorities on fighting corruption and increasing transparency. This is partly due to corrupt actors who are actively working against these measures, and unfortunately, exerting a great deal of influence over political leaders.

In many Arab governments, powerful individuals have actively influenced government policies and diverted public funds and state assets for their own self-interest and enrichment at the expense of citizens. This reduces anti-corruption efforts to merely ink on paper, where laws pass, but are rarely enforced or implemented. 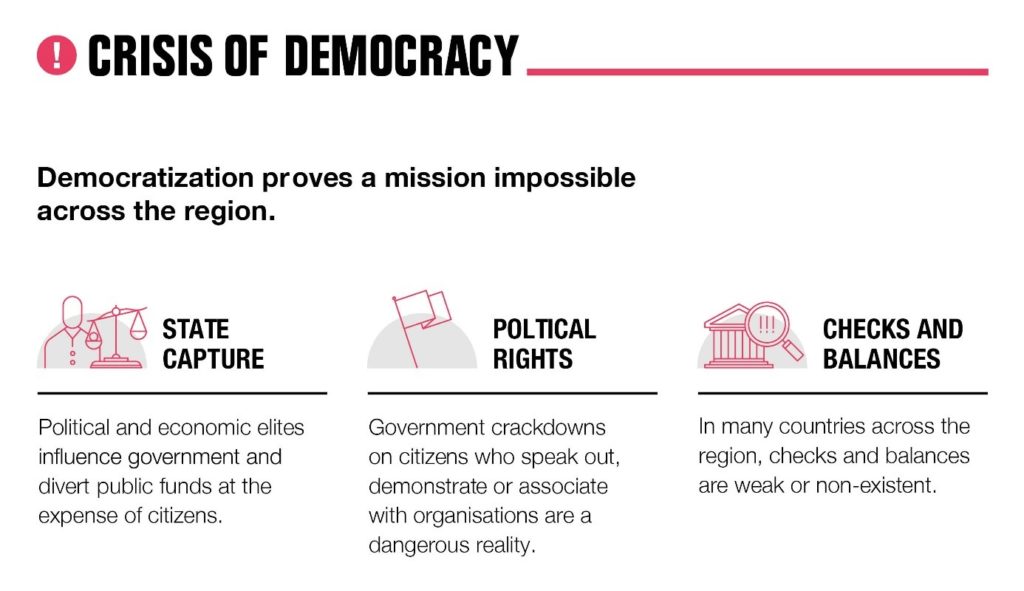 Without strong political will to combat corruption in the public sector, countries across the region are also undermining the political rights of their people. Government crackdowns on citizens who speak out, demonstrate or associate with organisations or activist groups are a dangerous reality.

Sadly, without sufficient checks and balances or political rights in place to challenge autocratic tendencies, anti-corruption efforts suffer and authoritarian practices persist across the region.

This year, while both Morocco and Egypt improved by 3 points apiece with scores of 43 and 35 respectively, these scores will offer citizens of both countries little comfort. With a global CPI average of 43, both countries have much room for improvement.

In Morocco, the government recently passed an access to information law after many years of delays and persistent calls from civil society groups to create a substantial law. However, in its current form, the adopted law is heavily criticised by civil society groups, including our chapter Transparency International Morocco, for serious deficiencies and restrictions.

Since 2006, the chapter has been advocating for a draft law that meets international standards. However, the final law included vague directives on the use and re-use of information and also contained a series of exemptions for national defense, internal and external security and private information that weakened its overall power.

Combined with harsh penalties for citizens who re-use information that harms “the public interest” or “distorts” content, the law proved fairly ineffective and failed to reflect many of TI-Morocco’s recommendations or those from other civil society groups.

Nevertheless, this move enabled Morocco to join the Open Government Partnership (OGP), a multilateral network of governments and civil society organisations committed to fighting corruption. With more than 70 country participants, OGP is an important platform that promotes transparency worldwide.

In Egypt, despite increasing by three points on the CPI, very few improvements exist on the ground, where serious corruption issues are currently challenging the country. Civil society organisations are still a target of travel bans and activists regularly face arrests. The Administrative Control Committee has been the main body investigating cases of corruption, returning some state assets and adopting a four-year anti-corruption strategy.

Several countries like Syria, Libya, Yemen and Iraq face challenges of instability, terrorism, war and conflict, to remain at the bottom of the index.

Yemen and Syria stand out for the sharpest decline in the last few years. Yemen decreased by five points over the last four years, moving from 19 in 2014 to 14 in 2018. This change partly reflects the direct relationship between war, serious breaches in human rights and corruption.

Syria decreased by 13 points over the last eight years, moving from 26 in 2012 to 13 in 2018. As in previous years, Syria remains at the very bottom of the CPI, having experienced violent conflict in the last few years. Unsurprisingly, the instability of government institutions and complete lack of political rights and checks and balances, allows corruption to flourish in Syria.

Sudan* scored 16 on the index for the second year in a row. Facing challenges of terrorism, war and conflict, Sudan remains at the bottom of the index. Since December 2018, many protesters have been killed in Sudan while speaking out. Government corruption was one of the major causes of the protests.

Jordan, United Arab Emirates (UAE), Qatar and Lebanon are four countries to watch in the coming years. They are relatively stable countries, but due to their geographic or economic status, they are in the spotlight.

With a score of 49, Jordan increased a point on the CPI since last year. In June 2018, Jordanian citizens took to the streets to protest against a draft tax law that would require them to foot the financial bill from corrupt governments, which has grown significantly over the past several years.

The people succeeded in overthrowing the government, replacing the previous leader with a new prime minister who promised change. However, despite prioritising good governance and fighting corruption, the new government has yet to fulfil any of its commitments. Another challenge is the presence of influential actors that are blocking any government attempts at advancing the anti-corruption agenda.

In a report published by our chapter, Rasheed for Transparency and Integrity, which reviewed Jordan’s commitment to SDG 16, the chapter made several recommendations to the government to improve its anti-corruption efforts. Specifically, the report recommends financial and administrative independence of all public institutions that serve anti-corruption functions, additional protections for civil society, and a legislative review to ensure freedom of expression is upheld.

While the UAE and Qatar score higher on the index than other countries in the region, this has more to do with their level of stateness and human development, i.e., efficient public administration, and high levels of gross domestic product (GDP), health and education.

Yet despite the strength of both countries in these areas, UAE and Qatar still lack democratic institutions and a respect for political rights. This leaves control of corruption up to the political will of the incumbent ruling class, which can change suddenly and leave any improvements in anti-corruption efforts behind.

In addition, in Qatar, while the government has managed to clean up many levels of bureaucracy to improve anti-corruption efforts across the country, higher levels of government remain opaque.

Investigations by the Organized Crime and Corruption Reporting Project (OCCRP) and the Center for Advanced Defense Studies (C4ADS) released last year show that Dubai has become an active global hub for money laundering. According to the report, real estate in Dubai worth millions of pounds can be bought in exchange for cash with very few questions asked. As a result, Dubai has become a money laundering paradise, where the corrupt and other criminals can go to buy luxurious property with no restrictions.

In Lebanon, recent elections raised concerns over political party financing and mismanagement of the electoral process. Our chapter, the Lebanese Transparency Association, worked to highlight these deficiencies among government officials and the public. Unfortunately, six months after the elections, the prime minister has failed to form a new government in a highly polarised country.

Political corruption and conflict of interest remain among the main challenges to any improvement in Lebanon. According to our recent report, Lebanon: Progress towards SDG 16, the country’s legal framework and political party financing regulations lack some crucial components, including transparency and accountability standards.

For the region to fulfil its anti-corruption commitments, there needs to be a serious change in the way countries in the region approach institutions, political rights, checks and balances and other pillars of democracy. To this end, we recommend that governments ensure the following:

(*) This article was originally published on Transparency International. Read the original article. The views expressed in this article belong to the author and do not necessarily represent ForMENA