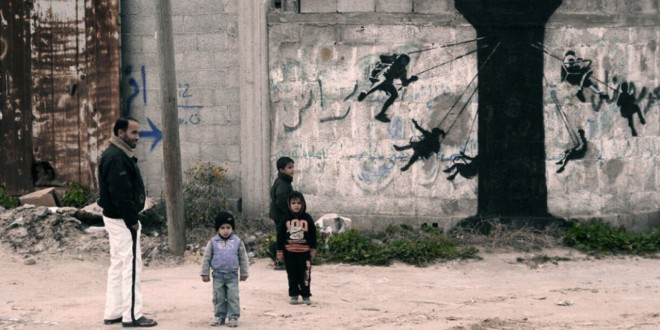 Banksy and the History of Palestinian graffiti

Banksy’s recent trip to Gaza drew the media’s attention, but Palestinians have a long history of political graffiti.

The anonymous British street artist, Banksy, has released yet another set of striking graffiti artworks – this time in the Gaza Strip. Six months after Israel’s latest attack on the Strip, “Operation Protective Edge”, left thousands of people homesless, nothing much has changed: only about five percent of the money pledged to rebuild Gaza has actually reached the coastal enclave. With his new artwork, the renowned artist painted quite a bleak image of the war-torn territory, reminding the world of its devastation.

The first of four pieces he revealed, shown below, was a painting on what seems to be the only door left standing of what was once a Gazan home. Called “Bomb Damage”, Banksy’s piece mirrors a sculpture of Niobe, a Greek mythological Goddess who turns into a weeping stone while mourning her murdered children. Another striking painting showed a kitten, supposedly playing with a ball of mangled wire. Describing the painting on his Instagram page, Banksy wrote, “A local man came up and said ‘Please – what does this mean?’ I explained I wanted to highlight the destruction in Gaza by posting photos on my website – but on the internet, people only look at pictures of kittens.” In another piece, Banksy drew an Israeli watchtower that he converted into a fun fairground ride for little kids. In addition to the photos, Banksy posted a 2-minute satirical video documenting his visit to the besieged territory, with the headline ‘Make this the year YOU discover a new destination’. The spoof travel advert welcomes you to Gaza, showing Banksy sneaking in via one of the underground tunnels with Egypt. With satirical commentary, the video goes on to show his artwork amidst the rubble and ruins of buildings and walls, and a few encounters with the locals.

The video ends with a photo of his final text graffiti, which reads: “If we wash our hands of the conflict between the powerful and the powerless we side with the powerful — we don’t remain neutral.”

Banksy is no stranger to the Palestinian-Israeli conflict, having previously visited the West Bank in 2005. Durig this visit, he left a number of outstanding, politically charged artworks on the Seperation Wall. His most famous pieces in the West Bank include a girl in a pink dress searching a soldier, and a girl carried off by balloons, conceivably in order to overcome the barrier.

Team Gaza Parkour responded to Banksy’s spoof tourism video with a vibrant spoof video of their own, “After Banksy: The Parkour guide to Gaza” by the Guardian Docs. Set to a soundtrack by Palestinian female hip-hop artist, Shadia Mansour, the team invites “tourists” to come visit Gaza, while posing as the tour guides, “Nearly 50% of us are unemployed and we are very available to show you around.”

Throughout the video, the freerunners perform all sorts of flips and leaps around some of Banksy’s artworks and amidst the ruins of homes and buildings destroyed during last summer´s 51-day war. The youth are also seen running across colourful blocks of concrete, characteristic of the latest Gaza youth graffiti project, by the Gaza Seaport walk way.

Expressing the difficulty of life in Gaza after the war and under siege, they describe how there are about 12,000 people that need homes, how electricity is scarce, and how most of their water isn’t drinkable. Yet they remain defiant: “in spite of all of this happening in Gaza, we are here and alive and our spirit is very strong.”

Banksy’s graffiti artworks are by no means the first or only graffiti work in Palestine. While graffiti in general is controversial and is heavily regulated elsewhere in the world, it is on the contrary inscribed in the political and social fabric of Palestinian society. Graffiti artists in Palestine generally, and Gaza particularly, do not need to worry about paying an £80 on-the-spot fine or about any legal ramifications for selling aerosol paint to under 16’s, as they do in the UK. Instead, they are encouraged and supported by the local authorities and civil society.

Graffiti emerged as a form of resistance during the Palestinian liberation struggle in the late 1980s and early 1990s. “I remember the first intifada, when the resistance youth and members of the different Palestinian political factions began using the walls as message boards to communicate with the people,” said Abu Ahmed Shahwan, a schoolteacher from Khanyounis city in the south of Gaza. Describing the long curfew hours imposed upon them by the Israeli military during the intifadas, Abu Ahmed continued: “The masked youth would spray on walls and in alleys names of martyrs and their affiliations, calls for general strikes, and slogans of protest and defiance.”

Gaza’s walls have indeed been stockpiling years of slogans and layers upon layers of green, yellow, black, and red, each representing a different Palestinian armed-resistance group. However, these first intifada graffiti works were not very artistic in nature. Essentially, these were hasty scribbles and messages sprayed by youth who feared any detection so as not to be captured or, worse, shot by Israeli soldiers during curfew hours.

What surfaced as a form of resistance and platform for party propaganda and political rhetoric grew to become an art form of advocacy and celebration. Much of Gaza’s graffiti expression soon encompassed the drawing of murals, mostly commemorating nationalistic occasions and international events, such as the Nakba Day (the “Catastrophe”, as Palestinians refer to the war of 1948), Palestinians’ Prisoners Day, and Women’s day.

Civil society organisations as well as international organisations also became involved in the arrangement for and supervision of hundreds of murals advocating human rights, such as the Maia Murals project. These murals used graffiti mural art to inspire concrete action for environmental justice, advocating the right to clean water in Gaza. Palestinian political factions also continue to have their own teams of graffiti artists and calligraphers that mark their presence, influence, and produce multi-purpose graffiti work on behalf of their parties.

With the withdrawal of Israeli occupation forces from Gazan eritory in 2005, it became easier for the Palestinians living in the Strip to draw graffiti much more freely. Mohammed Jabaly, a young graffiti artist and a member of both the Gaza-based Palestinian Artists Association as well as the Ramallah-based General Union of Palestinian Artists, has participated in the drawing of several murals advocating the Palestinian Cause across the Gaza Strip.

Some of these murals commemorated the Nakba, some advocated the rights of Palestinian detainees, while others remembered the anniversaries of Israel’s military campaigns against Gaza and the fallen martyrs. “I believe street art carries a very strong message and the murals chronicle our struggle,” Mohammed asserted, “but my favourite paintings and murals will always be the ones celebrating Gaza’s beauty and culture and spreading hopes of peace and freedom.” The image below shows Muhammed painting ‘Handala’, an iconic Palestinian cartoon figure of a child refugee created by artist Naji al-Ali.

Apart from the politically charged paintings and slogans, Gaza’s walls are also often adorned by colourful calligraphy and drawings that tell the stories of joy and sorrow of its inhabitants. Congratulation messages for returning pilgrims, newly weds, or released detainees as well as messages of mourning are noticeable wherever you look in Gaza. One of the few works covering this subject, “Gaza Graffiti: Messages of Love and Politics” by Sewidish photographer Mia Gröndahl, documents Gaza´s graffiti landscape between 2002 and 2009.

The following images illustrate the range of political graffiti present in Gaza today and the place of such wall art in the Palestinian national struggle.

One of the biggest canvases for graffiti artwork in Palestine, however, remains the West Bank’s separation wall, which is covered with dozens of graffiti art pieces that draw attention to the daily struggles of Palestinians under occupation in the West Bank and Jerusalem, and carry messages of human rights, resistance and calls for unity and peace.

With their paintbrushes and their spray cans, Palestinians from various political affiliations and backgrounds document their struggle against the Israeli occupation. Every graffiti piece records and preserves a moment in history, asserts a claim to the land, and expresses the national and cultural identity of its creator.

Images of keys and slogans about the right of return are some of the most widespread graffiti works across the Gaza Strip and the Occupied Territories. Often,  as in Muhammed’s piece shown above, these are accompanied by drawings and portrayals of Palestinian cartoonist Naji Al-Ali’s signature figure “Handala”, the barefoot refugee boy in ragged-clothes “who will remain 10 years old until he can return to a free Palestine”. According to Al-Ali, Handala represents him as a child when he was forced out of his home. Handala is not associated with any political faction, be it Fatah, Hamas, PFLP, or Islamic Jihad. He is just Palestinian. In his book A Child in Palestine: The Cartoons of Naji Al-Ali, the artist  also said “[Handala] was the arrow of the compass, pointing steadily towards Palestine. Not just Palestine in geographical terms, but Palestine in its humanitarian sense – the symbol of a just cause”. Today, Al-Ali and Handala are joined by hundreds of graffiti artists, who continue to struggle for this cause. 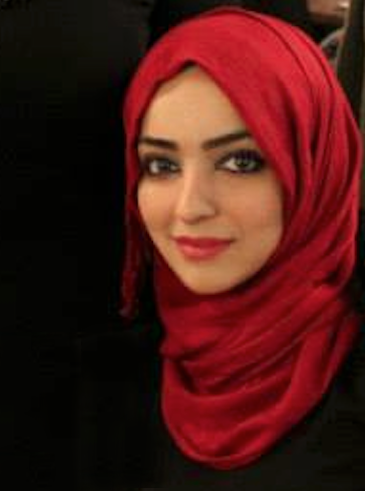 Director of Recruit Pal Ltd and a freelance writer. She is also a contributing author to the book “Gaza Writes Back”. Jehan tweets at @Palinoia and maintains a blog at palinoia.wordpress. com

5: property of the artist, permission for use given to the author

6-8: property of the author