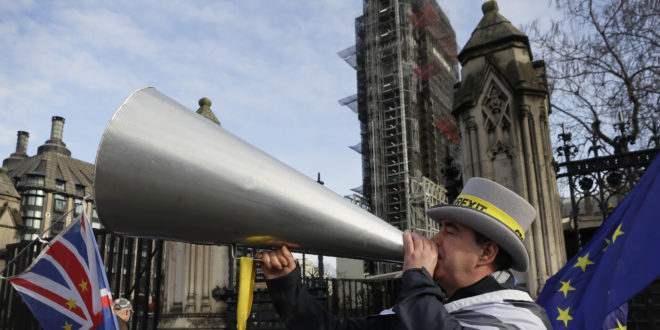 By Edward Yeranian, for the VOA News (*)

CAIRO – With Britain set to exit the European Union (at 2300 UTC) on January 31, Arab media are speculating on potential repercussions on Arab states in the Middle East region. Some analysts say that trade between Britain’s traditional partners in the Gulf and Egypt is likely to increase, while investment in Britain is also expected to grow.

Emirati businessman and hotel magnate Khalaf al-Habtour has been telling Arab and Western media that he’s expecting investments in Britain to increase after Brexit takes effect, providing he does not stand to lose money on them.

Saudi English-language newspaper Arab News wrote in 2018 that “institutional and private investors in the Gulf region would feast on comparatively low cost opportunities [in Britain],” assuming that Britain’s currency depreciated and British companies and properties became a bargain.

Khattar Abou Diab, who teaches political science at the University of Paris, tells VOA that he expects Brexit will give a reason to both Britain and Arab Gulf states to tighten their strategic ties.

He says that the Arab Gulf states — which have enormous investments in Britain — will probably try to use those investments to their advantage in stressing to London their strategic and economic importance vis-a-vis Britain.

Washington-based Gulf analyst Theodore Karasik goes a step further, telling VOA he thinks that some Arab and Gulf states will use their investments to get Britain to re-evaluate some of its strategic positions, now that they weigh more heavily on the country’s economic well-being.

“Brexit is causing London to reassess its strategic interests and you see those occurring now with Oman and Egypt and then you are also seeing that there are investment-flow changes occurring and this will reset these relations. But the politics involved is going to be a driver in several hot-button issues, including Iran, Yemen, the Levant and Libya,” he said.

Qatar’s leading newspaper, The Peninsula, reported in September that Doha has about $50 billion in investments in Britain. Qatar’s investment authority (the QIA) had promised to invest close to $6 billion in Britain due to Brexit back in 2017.

Doha’s Gulf and Arab adversaries in Saudi Arabia, the UAE and Egypt — following the imposition of economic sanctions by those countries against Qatar in 2017 — “are causing a bit of a rethinking of British support for some of Qatar’s activities in the region,” according to Karasik.

“Britain is a battleground, if you will, for competing interests on this question about what Doha is exactly up to in the region. So, this is also driving the conversation and also will feed into how post-Brexit Britain will deal with Doha and vice versa,” he said.

Khattar Abou Diab stresses that Britain tends to have closer strategic ties with the U.S. than with its European partners and that Brexit will probably reinforce that tendency.

He says that European countries, including France, Germany, Holland and Belgium have deployed special forces troops to the UAE, while Britain has instead deployed forces alongside the U.S. in Bahrain.

Egyptian President Abdel Fattah el-Sissi recently visited London — as the head of an African Union delegation — and met with British Prime Minister Boris Johnson. Egyptian media suggested that both countries are hoping to increase trade ties, especially given that Britain is the first and foremost foreign investor in the Egyptian economy.

Paul Sullivan is a professor at the U.S. National Defense University in Washington. He tells VOA that Britain, “will be looking for new trading partners to substitute for declining trade with the EU,” and that “Egypt and other large population states in the region may benefit from this.”

Sullivan also says he expects that “Brexit will have negative implications on the British economy,” and that this will “likely reduce [its] oil and liquid natural gas imports. This,” he argues, “could affect some Arab states via the energy markets.”

(*) This article was originally published on VOA News. Read the original article. The views expressed in this article belong to the author and do not necessarily represent ForMENA