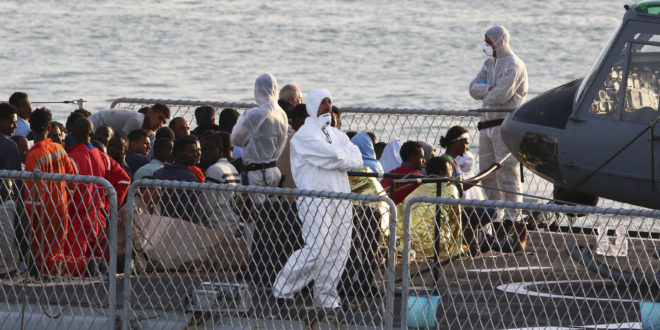 Migrants to Europe must learn the language of their new home countries and encourage their children to integrate in the light of the recent Islamist terror attacks, EU governments plan to say in a declaration drafted by France, Austria and Germany.

The contentious draft statement, due to be made by EU home affairs ministers on Friday, is being championed by the French president, Emmanuel Macron, who was accused by Turkey’s president, Recep Tayyip Erdoğan, of religious persecution after his recent warning of the dangers of Islamist separatism.

It will also say Brussels should fund religious education within Muslim communities, and NGOs publishing “content hostile to integration will be excluded from receiving” state support under the terms of the resolution.

There is some unease among fellow EU governments about the framing of the current draft, however. Sweden, Luxembourg and the Netherlands, among others, have traditionally pushed back against those who have viewed migration and religion through the prism of security.

“Singling out a religion or group is never the answer to violent extremism by individuals,” said one senior EU diplomat. “We should do well to remember that embracing fundamental values isn’t just a responsibility of migrants or the Muslim community but for all us. We should be careful not to bring down our accomplishments by other people’s sins.”

Should the statement be pulled before Friday, EU diplomats believe Macron will seek to push it again at a meeting of the bloc’s 27 heads of state and government in two weeks time.

In a letter to the Financial Times in which Macron complained about an article criticising his approach – now withdrawn from the newspaper’s website – the president wrote that he would “not allow anybody to claim that France, or its government, is fostering racism against Muslims”.

The current draft ministerial declaration says that the recent terrorist atrocities in Conflans-Sainte-Honorine, Nice and Vienna have revealed the “extent of the threat we face from Islamist terrorism”.

Alongside a series of technical counter-terrorism proposals, including the creation of backdoor access to encrypted communications used in chat apps, the statement proposes a tougher line on the need for migrants to integrate.

“Successful integration of immigrants with a sense of belonging and equality is of central importance for the social cohesion of our modern pluralist, and open societies,” the draft says. “Integration is a two-way street: providing support but expecting more in return (fordern und fördern) is a core principle in this. This means that migrants are expected to make an active effort to become integrated while they are offered help with integration through government integration measures.

“Along with recognition of European values, what successful integration means above all is learning the language of one’s new country, earning a living for oneself and for one’s family, and supporting the integration of one’s children …

“It needs to be possible to sanction sustained refusal to integrate more strongly than has been the case to date. Organisations that support content hostile to integration will be excluded from receiving public funding.”

The declaration further suggests that the European commission should fund religious education and training among imams.

“We want to strengthen European Muslims as our partners in the fight against Islamist extremism for they too are its victims,” it says. “We want to support them in their efforts to organise their religion independently of foreign interference. In our view it is necessary to develop a shared language at European level which distinguishes between Islam and Islamism in the sense of religiously motivate extremism.”

Charles Michel, a former prime minister of Belgium who is now president of the European Council, tweeted: “To fight the Ideology of Hatred, we need to setup as soon as possible a European Institute to train imams in Europe.

“Online messages glorifying terrorism must be quickly removed. There must be no impunity for terrorists and those praising them on internet.”