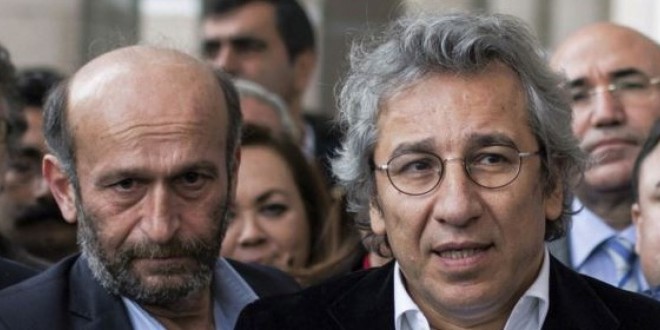 Two of Turkey’s leading journalists [ both pictured up] on Wednesday faced a possible life prison sentence after they were charged with plotting to overthrow the government of President Recep Tayyip Erdogan by reporting on secret arms shipments to Syria.

Prosecutors asked the Istanbul court to sentence Cumhuriyet newspaper’s editor-in-chief Can Dundar and Ankara bureau chief Erdem Gul each to one aggravated life sentence, one ordinary life sentence and 30 years in jail, the Dogan news agency reported, quoting the indictment.

The report said that both Erdogan and his hugely powerful but low-profile ally, the head of the National Intelligence Organization (MIT) Hakan Fidan, are named as plaintiffs in the indictment.

Dundar and Gul were both placed under arrest in late November over the report earlier in the year that claimed to show proof that a consignment of weapons seized at the border in January 2014 was bound for Takfiri (Al Qaeda) militants in Syria.

Since then, they have both been held in the Silivri jail on the outskirts of Istanbul ahead of their trial, whose date has still yet to be announced.

In the indictment, they have been formally charged with obtaining and revealing state secrets “for espionage purposes” and seeking to “violently” overthrow the Turkish government as well as aiding an “armed terrorist organization”, it said.

The penalties demanded by the prosecutors are significantly higher than had previously been expected.

The case has amplified concerns about press freedom under the rule of Erdogan, who had personally warned Dundar he would “pay a price” over the front-page story.

The Syrian government blames the United States along with Saudi Arabia, Qatar, Turkey and the Israeli regime for backing terrorist groups inside the country.

This article was originally published on Alwaghit. Read the original article. The views expressed in this article belong to the author and do not necessarily represent ForMENA