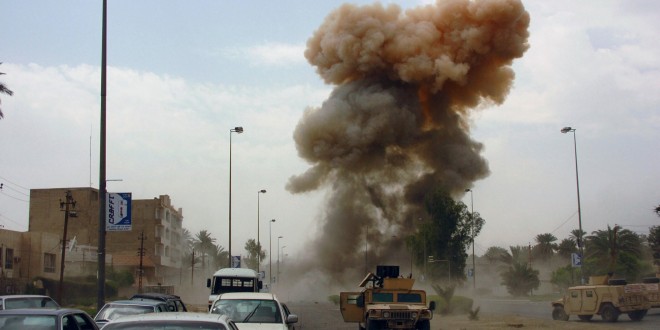 Iraq’s ruling parties within the Shiite National Iraqi Alliance(NIA) have chosen to depend on Popular Mobilisation Forces (PMF) and Iran in fighting the Islamic State (IS).  This runs counter to the approach proposed by Washington, which is based on rebuilding the army and gaining the support of people in Sunni areas by forming a national guard which would make them true partners in the Iraq state.

The impasse afflicting Iraq is fundamentally rooted in this sectarian division, which the involvement of the Iran-backed PMF can only exacerbate. Indeed, if anything, it may even work in IS’ favour, allowing them to present themselves as the guardians of the Sunnis – especially following reports in the international media of atrocities committed by the PMF in Arab Sunni areas.

The former Prime Minister, Nouri Al-Maliki, was the first to call for the establishment of the PMF, as he feared arming the Sunni Arab provinces. The PMF have since been assigned responsibility for the national security department, instead of the regular army.

The PMF Shiite militias, such as Badr Organization, Asa’ib Ahl al-Haq (League of the Righteous), Hezbollah Battalions, Imam Ali Brigades, are linked ideologically and organisationally to Iran. Some of these groups have fought against the Americans while others have supported President Bashar al-Asad in Syria’s civil war. They now form the backbone of the PMF. The PMF have also benefited from the fatwa of Grand Ayatolla Ali al-Sistani, Iraq’s highest Shi’a religious authority, whose call for Jihada al-Kifaya (Jihad as a duty) encouraged tens of thousands of Shiites to join PMF factions. The PMF was well financed and armed.

The Sadrist Movement, meanwhile, joined the PMF as part of an independent formation of “Peace Brigades” and insisted on operating under the command of the army rather than the PMF-dominated national security department. Headed by national security advisor Faleh al-Fayed, this latter body also includes Iran-backed Abu Mahdi al-Mohandes (Katiab Hizb Illah), head of the Badr Organisation Hadi al-Aameri and militant cleric Qais al-Khazali, who are reportedly acting in league with al-Maliki.

However, the news of an alliance between, among others, Sadrisrt Al-Ahrar Blocand former Prime Minister Ayad Alawi’s National List indicates a change within Iraq’s Arab Shiite communities. This development would seem to signal a desire amongst many Shia to distance themselves from the Shiite militias allied with Iran.

The PMF has benefited from America’s decision to not intervene with ground forces, as this has justified Iraq’s turn to Iran for assistance. The Islamic Republic has exported arms worth over 10 billion US dollars to Iraq since the fall of Mosul, including al-Fajr and al-Fateh missiles.

This is how history repeats itself. The Iraqi opposition depended on America to topple Saddam, and now Iraqi Shiite forces are depending on Iran in its war against IS instead of allying with and opening up to the people in Arab Sunni provinces.

The emergence of IS was an opportunity to restore national unity for Iraqis in the name of defending the country against a common enemy. But both the Shiite and Sunni leadership – in both the government and political opposition – suffered from lack of pragmatism and fragmentation, which made such cooperation impossible. Washington’s reluctance to put boots on the ground similarly left a vacuum for Iran to fill, with the Islamic Republic presenting itself as a Shiite saviour from the danger of IS.

The relevant success of the PMF in seizing some IS-controlled territory has increased the confidence of its leadership, who have therefore became less prepared to compromise with the leaders of the Arab Sunni provinces. They have simply become more dependent on Iran. The PMF itself has, over just a few months, transformed from a few militia into a military force with over 100,000 fighters equipped with light and medium weaponry and a leadership independent of the Iraqi army – the fighting power of which has reduced to under 50,000 men. In effect, the PMF has become a parallel force to the regular army, similar to the Iranian Revolutionary Guard (IRG).

The move of the PMF to invade Tikrit before the formation of the new National Guard and their lack of interest in responding to Sunni demands to form and arm local actors to defend their provinces has also lead to Washington refusing to deal with the Shiite militias or provide them with air cover.

As a result of the threat posed by IS, Iran has achieved big political and media gains in Iraqi Shiite population. The Islamic Republic has also claimed credit for Baghdad and Erbil not falling under IS control, while photographs of Iran’s militant and political leaders have been hung in the streets of Baghdad and the Shiite provinces.

Iranian satisfaction with its newfound influence has been reflected in statements made by Islamic Republic officials. Illustrative of this is what Ali Younesi, Special Assistant to the President of Iran’s ethnic and religious minorities, said on 7 March 2015:

“Today, Iran has become an empire like it once was throughout history, and Baghdad, currently, is its capital city, the centre of its civilization, culture, and identity”

In spite of many Iranian media outlets criticising this statement, the editor-in-chief of the Iranian “Mahr” agency, Hassan Hanizadeh, wrote an analysis on 12 March 2015 entitled “unity between Iran and Iraq is a must”. Hanizadeh stated that

“it is time for the Iraqi nation to say its final decision and choose between fake, ignorant Arabism and true Islam and shake the dirt off its clothes from Arab humiliation”.

“the majority of Iraq is known for its ideological affiliation to the doctrine of Ahl al-Bayt [“People of the House”, a foundational doctrine in Shia Islam]. This is the main reason behind the hostility of the Arab regimes, especially the surrounding Arab countries towards Iraq”.

However, the faltering campaign to retake Tikrit and the statements of some Iraqi militants on the need for American air support represent setbacks to those who wanted to reconquer the town as a means of enacting revenge. Tikrit may indeed fall in the future, but the battle for control of the town will be similar to that for Kurdish Kobane in Syria. The much bigger city of Mosul in northern Iraq represents an even greater challenge. Like these campaigns, the retaking of Tikrit will be extremely difficult, if not impossible, without effective air support. Kobane, it should be remembered, only fell after nearly 2000 American air strikes.

The complications concerning Tikrit reveal the PMF’s weaknesses and Iran’s fear of overextending itself in the Iraqi quagmire. One reason for this could be possible effects on the ongoing nuclear negotiations with the United States.

In addition, the operations of the PMF in Kirkuk and surrounding areas has raised fears in Erbil, the capital of Iraqi Kurdistan. Indeed, Masrour Barzani, the head of the Kurdish intelligence forces, recently stated that the PMF may become more dangerous than IS itself.

The United States is adopting a strategy of patience and, at least as far as ground forces go, non-interference. This has given Iran an opportunity to increase its influence in Iraq.

The Pentagon has disagreed with the White House more than once on how to deal with the situation in Iraq. In this regard, David Petraeus, former commander of the US military in Iraq and former head of the CIA, gave an interview to the Washington Post on 21 March 2015, in which he stated that that PMF is no less dangerous than IS. Patraeus’ statement can be seen to reflect the fear among US military circles of Iranian expansion in Iraq.

The US military chief Dempsy has confirmed this concern, to the point of raising the possibility of dismantling the international coalition and, in so doing, stopping American support for the Iraqi government.

However, Washington retains significant leverage vis-à-vis Iran. In addition to being able to offer or withhold air support from Iraqi forces (whether regular army or PMF), the United States may pressurise Iran through the nuclear negotiations, expected to run until the end of March.

The need for an Arab approach

There is no unified Arab plan. Instead, there are a range of financial, intelligence and diplomatic capabilities confined to the Gulf States and Jordan, who fear the expansion of IS, but remain dependent on American and European aid. These countries are also afraid that the reconciliation of the West and Iran will come at the expense of Arab states, especially those of the Gulf.

The fact that IS is coming under attack from American and Western air forces gains it sympathy as a Muslim force capable of defying the “New Crusaders”. Washington’s recommendation of fighting IS using Arab Sunni forces, this could in fact deepen regional sectarian divisions by allowing IS to represent itself as the true representative of Sunnis, rather than “American Sunnis”.

In addition, Washington’s cooperation with Iran and with Assad is damaging the international coalition’s credibility among Arab Sunnis, while at the same time benefitting IS.

Indeed, the stated intention of defeating IS at any cost could come at the cost of Iraq remaining an independent and unified state, by establishing a semi-independent entity for Sunnis and another for Shiites alongside the autonomous Kurdish territories. Under such a scenario, Iraq would become the “Non-United Iraqi Emirates”. Despite its military victories in Iraq, the United States has been unable to find a durable alternative to this outcome.

Thus, IS must be defeated not only militarily, but with an alternative ideology. For this, a new and unified Arabism appears the most effective option. This would emphasis a common Arab identity, Iraqi or Syrian, uniting Muslims and non-Muslims and going beyond sectarianism.

The Gulf countries (Saudi Arabia, UAE, Kuwait), along with Jordan and Egypt could form the core of the new united Arab community, which would introduce a new definition of Arabism that goes beyond the Arab nationalist movement’s previous mistakes. The errors of the past must not push us to let our nationalist affiliation completely replaced by our Islamic identity, which we should not abandon in the fight with IS. The important of keeping both these strands in balance can be seen in our rich tradition of reformist thinkers: Jamal ad-Din al-Afghani, Mohammed Abduh, Khair al-Deen al-Tunisi, Rasheed Reda, Shakeeb Arsalan, and others.

The new Arab movement I have in mind would respect the autonomy of each state. This would both end the Sunni-Shia sectarian division and benefit the national interests of each country.

Until a united Arab view is crystallised, however, Iraq will continue to bleed.  This makes division inevitable, as Shiite factions and Iran – under American pressure and violent resistance – see no advantage in restoring the Arab Sunni provinces and settling for the control of territories inhabited by Shia or neighbouring Baghdad. Under current conditions, the PMF leadership will aim to replace the present leadership in Baghdad with their own men.

The independence of Kurdistan will also become an established fact, not a mere ambition. The leader of Kurdistan region have confirmed more than once that they will fight only in the territories they consider Kurdish. This, however, opens the possibility of surrounding IS and exhausting it – but only if the people of the Arab Sunni provinces rise to fill the vacuum and establish their presence.

Dr. Ghassan Al-Attiyah is the director of the Iraq Foundation for Development and Democracy. He has previously lectured at many universities, as well as holding positions in the United Nations and Arab League.
Share