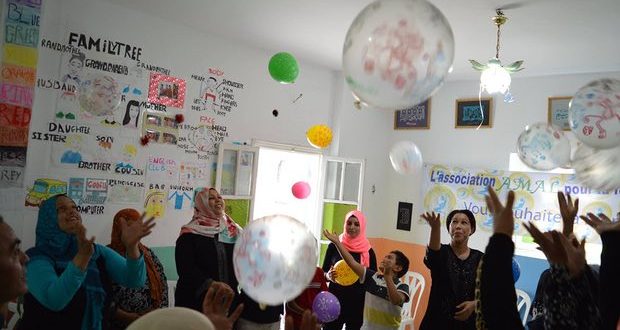 ‘They’re not seen as human beings’: life for unmarried mothers in Tunisia

Often abandoned by their families and discriminated against in law, the odds are stacked against Tunisian women who have children out of wedlock

Tunisia is often hailed as a progressive Arab country, where, according to US human rights watchdog Freedom House, “women enjoy more social freedoms and legal rights than in most other countries in the region”. A series of gender reforms under then president Habib Bourguiba between the 1950s and the 70s abolished polygamy, gave women the right to vote, divorce and have abortions, and elevated the status of women in Tunisian society. For all, it seems, apart from unmarried mothers.

“They’re not seen as a human being like everyone else,” says Rebah ben Chaaben, a psychologist at Amal, the country’s only clinic solely dedicated to the legal, social and mental health issues affecting unmarried mothers, which is based in Tunis. By taking in about 50 mothers each year, the charity acts as a safe space for the women and their babies. Almost all of the women at Amal come from low socioeconomic backgrounds. The majority have had no sex education; some have had no education at all. Most have found themselves pregnant after consensual sex with their boyfriends or fiances, and consequently been abandoned by them.

On finding out she was pregnant, Mariam’s fiance left her. “Then he married another woman,” she says. Large splotches of breast milk stain her shirt; her daughter is only 20 days old and nursing constantly. They will stay at Amal for the next four months, the maximum amount of time women and their babies can stay here. Amal assists them in finding flats and jobs.

“Everything [for these women] depends on the reaction of the family and the father,” says Semia Massoudi, the director of Amal. Premarital sex is forbidden in Islam; an unmarried mother is seen as bringing shame and dishonour. Families often pressure their daughters into giving up their babies. According to the French NGO Santé Sud, more than half abandon their children.

“I didn’t tell anyone I was raped,” says Fatma. Born into a farming family in a village in the west of the country, Fatma was abused her whole life. On one hand, her middle finger was lobbed off at the knuckle by her brothers. After she was raped by a member of her extended family, Fatma’s mother sent her to a hospital in Tunis during her third trimester. Her mother was willing to let her back into the house if she abandoned the child; Fatma refused. Her attacker continues to live in her village.

The social taboo is bolstered by the legal system. “There is a legal difference between a ‘legitimate’ and an ‘illegitimate’ child,” explains Monia ben Jemia, a jurist and the president of the Tunisian Association for Democratic Women (ATFD). That difference begins at the hospital, where an unmarried woman is immediately interrogated by police, who ask for the father’s name. Because of patriarchal tendencies in family law, ben Jemia says, “women don’t have any actual legal guardianship over their children outside of marriage”. A child born out of wedlock doesn’t have the same heritage rights as a child born to married parents, and there is no legal jurisprudence for unmarried maternal guardianship. Both Morocco and Algeria have eliminated the chef de famille laws that give men sole guardianship, a positive step that Tunisia still has not taken.

Given the legal and social taboos, recognition from the father is paramount for many women, even those who were raped. Amal provides mediation services between the mothers and fathers, although ben Chaaben acknowledges this often isn’t fruitful.Instead, most women chose to use the 1998 “patronymic name law”, which allows women to conduct a DNA paternity test; the ATFD has worked with dozens of Amal women during this procedure.

Many mothers are grateful for this option, as it will shield their children from the social shunning, and provides them child support. But it is arguably a flawed law, too, granting an absent and reluctant father legal powers that allow him to arbitrarily enter the child’s life. Furthermore, the law doesn’t help these women once they are back in society, where they face judgment and harassment while navigating the financial and psychological challenges of raising a child alone.

In this hostile landscape, Amal is a unique place. “We don’t judge the women here,” ben Chaaben says. Swaddled in fluffy blankets, half a dozen babies are nodding in and out of sleep in the entranceway. Ben Chaaben is positive the country is slowly moving in the right direction. “To change the role of these women in society,” she says with a smile, “we must be optimistic.”

Note : Some names have been changed in this article.