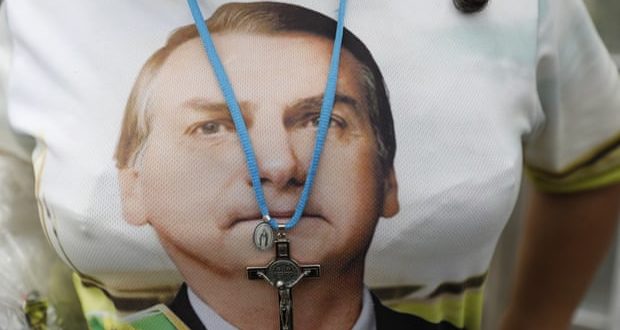 The populist right is forging an unholy alliance with religion

From Salvini to Orbán, ethno-nationalists are hijacking religious themes to fuel their agenda. Progressives need to fight back

By Daniel Steinmetz-Jenkins and Anton Jäger, for The Guardian (*)

Why are so many religious citizens drawn to the rhetoric of authoritarian leaders such as Matteo Salvini, Viktor Orbán, Jair Bolsonaro and Narendra Modi? Even in countries with a strong secular tradition, such as France and the Netherlands, rightwing populists like Marine Le Pen and Geert Wilders are quick to resort to language that presents “Judeo-Christianity” as the pillar of western European civilisation.

In Belgium, the Flemish nationalist party N-VA has made a name for itself defending institutions “abandoned” by the Christian-Democrats, such as the Catholic schooling system and church services. In Italy, Salvini ostentatiously brandished a Catholic rosary as results from the European elections came in. In Hungary, Orbán has turned a defence of “Christian civilisation” into official state doctrine. Making a speech in Warsaw, where the ruling Law and Justice party has presented itself as the political wing of conservative Catholicism, Donald Trump echoed John Paul II’s old invocation: “We want God.”

Clearly there is a key link between populism and religion. But there seems to have been relatively little academic interest in the connection. Jan-Werner Müller’s What is Populism? (2016), for example, spends no time discussing the relationship at all. This is all the stranger, given that the movement that launched the term “populism” – the original “big P” Populists in the late 19th-century US – was fiercely churchgoing. As a coalition of anti-capitalist radical agrarians and workers, the Populists drew on previous Methodist networks (mainly in the south) and sources in the American evangelical tradition. They called their movement the “cooperative crusade”.

We no longer live in such an age of mass participation, whether in politics or religion. Parties and civil associations have experienced a dramatic decline in the past 30 years, across all western democracies. Traditional churches have lost their followers to new communities of belief.

Yet there are very good reasons to view much of today’s populism as, to some degree, a religious backlash. The Eurasian traditionalism of Vladimir Putin, the Christian-Democracy of Orbán, the Judeo-Christianity of Trump, the prosperity Pentecostalism of Bolsonaro, the populist Catholicism of Salvini and the Hindu-nationalism of Modi, all speak of a religiously infused reaction to secular governance. What has been eroding for the past few decades is not simply democratic or liberal values per se; there has also been a growing suspicion of secularism and the secular elites who propagate it. This process began with the rise of US evangelicalism in the late 1970s. It not only led to political successes at home but also to global missionary expansions into Latin America and Africa, which exported a suspicion of all things secular.

It is telling that we fail to see the global theological counter-revolution taking place right before our eyes. This dimension of our political moment might go a long way to explain why rightwing populists have scored so many victories in recent years: populists have proven very adept at hijacking religion.

The deployment of religion is not about the doctrinal strength of religious life – religious practice continues to decline steadily in most western democracies, and most citizens are not involved in religious institutions. Instead, populists’ use of religion seems to offer a way of forging a new consensus. It is a tool to engage a society that is felt to have lost its moral centre.

The French fascist Charles Maurras said that he did not believe in God but “thought it crucial that people believed in him”. Amid the dizzying effects of globalisation, “God and country” populism offers a way of incorporating capitalism into some kind of traditional religious framework. These populists are following the script of Steve Bannon (a Catholic), who claims the global financial crisis came about because the restraint demanded by religious traditions broke down due to the corrosive effects of godless secularism.

One of Bannon’s main inspirations is Christopher Lasch, the American cultural critic. In his 1991 book The True and Only Heaven, Lasch argued that American society no longer felt as “if it was governed by a moral consensus”. For Lasch, collective control over norms was secondary to the free interplay of ideas in an intellectual marketplace. The clearest example of this was the degradation of religion to a purely private affair – a therapeutic tool that could be picked up in times of need, but which would never turn into a lived creed. “Among elites”, he claimed, religion was now “something useful for weddings and funerals but otherwise dispensable”.

Lasch may not have approved of the recuperation of his thought by the likes of Bannon and today’s populists. What is clear is that the unease with secularisation that he diagnosed in 1991 has only intensified. Religiosity, however therapeutic and emptied of social content, offers means for “re-enchantment”. But in the rightwing populist movements that are gaining influence in western democracies, it has also allowed a language of “repoliticisation”, directed against a world of impersonal market forces and technocrats.

A left responding to these developments need not suspend its own secular commitments. But it would do well to recognise the potency of religious language today – and its capacity to recraft norms. Capitalism is changing before our very eyes, folding itself into the new corset that populists have prepared for it.

Religious themes and traditions are being offered as a haven in a heartless world, a new moral centre. Rightwing populism’s opponents need to find a response.