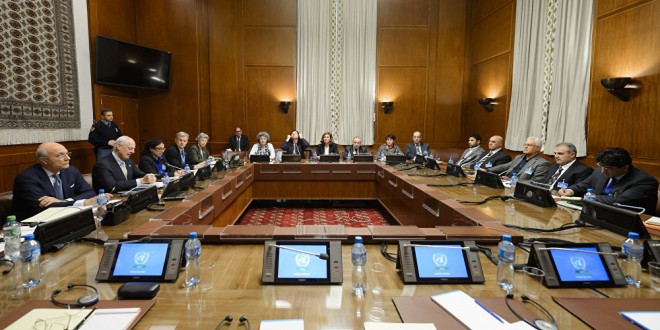 Syria peace talks : what you need to know

What are the ‘Intra-Syria’ Talks in Geneva and can they succeed?

By Richard Spencer, Middle East Editor at The Telegraph

The United Nations is hosting a new round of talks aimed at ending the war in Syria, meeting at the Palais des Nations in Geneva.

They are being convened by the UN envoy to Syria, the Italian-Swedish diplomat Staffan de Mistura.

There have been two previous attempts to strike a peace deal. The first was a declaration of principles forged by the international powers in June 2012, and the second a full-scale negotiation in January 2014 when the regime met the Syrian National Coalition, a Western-backed body made up of exiled political leaders and organisations like the Syrian Muslim Brotherhood.

These talks are now known as Geneva I and Geneva II. However, their failure to bring peace has meant the UN is trying to avoid the new talks being called Geneva III.

This time, there is a major difference, in that representatives of armed rebel groups will be sitting at the negotiating table with the regime – or at least, in the same building. At first, the sides will not meet face to face, but will hold separate talks with negotiators who will shuttle between the two.

The regime side’s negotiating team is led, as it was two years ago, by Bashar al-Jaafari, the stony-faced Syrian ambassador to the UN.

The opposition is being represented this time by a body calling itself the High Negotiations Committee. It was formed in Riyadh in December, and elected as its leader Riyad al-Hijab, who was briefly the Assad regime’s prime minister before defecting in August 2012.

However, its chief negotiator is Mohammed Alloush, a key and revealing appointment. He is from the Islamist rebel group particularly strong in the Damascus suburbs called Jaish al-Islam – Army of Islam – which is backed by Saudi Arabia.

Mr Alloush himself is a symbolic choice – his cousin, Zahran Alloush, the group’s leader, was killed in a Russian air strike last month.

The Russians and Syrian regime regard Jaish al-Islam as a “terrorist group” and at one stage opposed its presence at the talks.

Mr Hijab and Mr Alloush will be representing a broad alliance of opposition groups and individuals, ranging from the original Syrian National Coalition to most of the Islamist and secular forces fighting the regime on the ground.

There are some telling absentees. Islamic State of Iraq and the Levant (Isil) were not invited – as a UN-recognised terrorist group, all sides say it must be defeated on the battlefied, not invited to a conference chamber.

The same is true for Jabhat al-Nusra, the local branch of al-Qaeda, though its position is more complex – it fights the regime alongside other, internationally-supported, rebel groups.

Also missing is Ahrar al-Sham, a powerful Islamist-Salafist armed group, probably the strongest force in northern Syria, where it is fighting alongside Jabhat al-Nusra.

Its representative in Riyadh in December, Labib al-Nahhas, signed the document setting up the HNC and agreeing to attend talks in principle, but it is split on whether to join and is not sending representatives.

Also not invited as a group are the Syrian Kurds, in the shape of the PYD, the group controlling large areas of northern Syria. Their invitation was held up by a row over whether they should sit with the government – whom they claim to oppose – or the rebels, whom they have often fought for territory since the start of the war.

Few independent observers hold out much hope that the talks will succeed, at least in the short term.

The UN is calling them “Intra Syrian Talks” – and the absence of the word “peace” in the title seems to be deliberate. Mr de Mistura is clearly trying to lower expectations.

The official aim is to bring all sides of the civil war together, in the hope of lessening the violence and perhaps bringing about a ceasefire.

Only then will there be an attempt to come up with a peace deal.

The danger is that as with the previous “peace” talks they actually lead to an escalation in fighting.

The Russians announced the latest drive to talks at the same time as confirming they were beginning their own bombing campaign in Syria. That has led to regime gains and a stronger negotiating position, enabling them to hold out for more concessions from the opposition.

A senior official said that Bashar al-Assad’s representatives were going to Geneva “to listen, not to negotiate”, adding that the regime was confident of military victory this year.

The rebels, meanwhile, say that in advance of talks, the Americans and their Gulf allies have withheld supplies of heavy weapons like TOW anti-tank missiles, to force them to come to the table.

That itself implies that once talks commence, arms supplies will resume. Then the rebels could in turn try to make the gains necessary to negotiate from a position of strength.

This article was originally published on The Telegraph. Read the original article. The views expressed in this article belong to the author and do not necessarily represent ForMENA