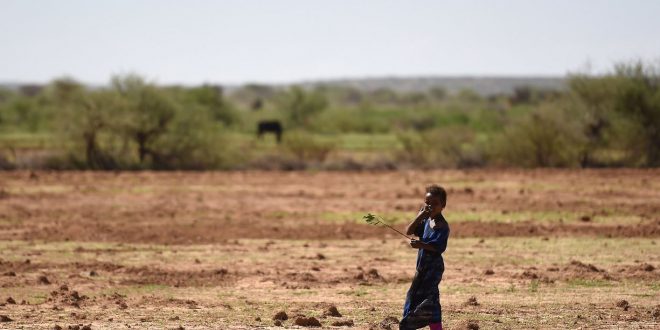 By: Patrick Wintour, Diplomatic editor, at The Guardian (*)

The Somalian government has pleaded for world leaders to lift an international arms embargo, as the head of the UN said Somalia needed a further $900m (£700m) in aid this year to combat its worst droughts in decades.

Some of the hardest-hit areas are under the control of the Islamist group al-Shabaab. The Somali president, Mohamed Abdullahi Mohamed, said heavy weaponry would allow his government to crush the insurgency and drive the group from the country.

Mohamed, who heads a young, new cabinet in which the international community is placing faith, made the plea at a conference in London convened by Theresa May. The event, attended by more than 40 countries, drew international figures including the UN secretary general, António Guterres, and the US defence secretary, James Mattis.

The Somalian president said the 10-year fight against al-Shabaab was lingering because both sides were using AK-47s assault rifles and little in the way of heavy weaponry. He warned that unless the Somali army had access to more sophisticated arms, the conflict would continue for a further decade. Any lifting of the arms embargo should be part of a phased political plan, he said.

The conference was given extra urgency by the return of famine to Somalia, which now affecting six million people. Guterres said a UN assessment showed that the east African country was facing a shortfall in aid of more than $800m this year.

A famine in 2012 led to 250,000 deaths. Aid agencies are concerned that the slowness of the international response to the current drought and the lack of access to affected areas will mean a repeat. Guterres said the 2012 famine was “a stain on the conscience of humanity”, adding: “This time we must save lives before it is too late.”

At the heart of the conference on Thursday was a deal whereby Somalia would be offered extra aid and security training in return for an agreed four-year political reform programme, which will try to unify the regionalised country and will lead to a more unified national army.

The UK foreign secretary, Boris Johnson, rejected an early lifting of the arms embargo, saying now was not the time since the priority had to be training the Somali forces.

He described Somalia as “a wounded country”, but said the agreement would accelerate the healing of the country and was not “just some sticking plaster”.

Admitting there had been numerous previous summits on Somalia, Johnson said the unique aspect of this conference was the way in which regional African leaders had committed to a new security architecture in Somalia.

Guterres said the aim now should be to coordinate a national army. “The current effort involves different countries training different groups in different parts of the country with different doctrines,” he said. “That is a recipe for a disaster. It is not a recipe for developing a true national army or police force. There is a recognition that coordinated training must take place with the aim of building one army with one doctrine, capable of fighting an insurgency.”

Somalia and the African Union (AU) have been battling to drive out al-Shabaab for the past decade, but large parts of the country remain under the Islamist group’s control. This week, a suicide bomber killed six people in the capital, Mogadishu.

The aim is for a 20,000-member Somali force to take over responsibility for security, with forces from the AU mission (Amisom) to the country departing by 2020.

The military battle has been compounded by the risk of a return of famine, with aid experts suggesting the international response has been too slow. Remittances from the Somali diaspora in the west are being blocked as part of counter-terrorism measures.

Doubts have been expressed about the future capacity of the Somali army. Kenya’s president, Uhuru Kenyatta, said he would not withdraw forces until his country’s borders were secure and al-Shabaab, which has carried out attacks in Kenya, was crushed.

“We can hurry to leave, but what happens when an inadequately prepared Somali force is left to its own devices? A vacuum is left. It is not a Somali problem. It is in essence our problem,” he said.

Kenya sent troops into Somalia in 2011 before incorporating 4,000 soldiers into Amisom in July 2012.

The AU has more than 22,000 soldiers from Burundi, Djibouti, Ethiopia, Kenya and Uganda battling against al-Shabaab. It fears a premature departure of Amisomwould weaken the fledgling Somali government and allow the jihadis to spread through east Africa.

The UK has made Somalia a diplomatic priority. There is a large and entrepreneurial Somali diaspora in the UK, from which British Somaliland became independent in 1960 and a large proportion of the Somali cabinet has British connections.