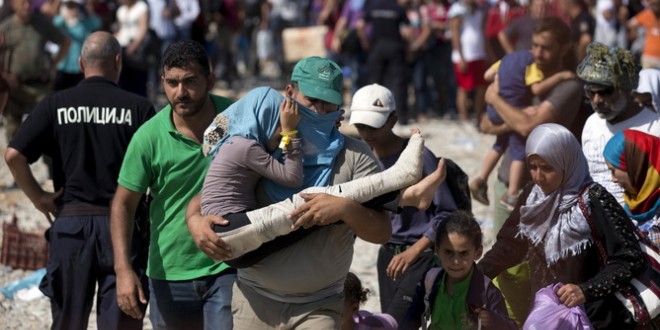 Only a Global Response Can Solve Europe’s Refugee Crisis

Phil Orchard, The University of Queensland

The recent deaths of asylum seekers attempting to reach European shores have prompted ongoing calls for action. But, given the scale of the issue, only a comprehensive, global program can go some way to solving the crisis.

The UN High Commissioner for Refugees (UNHCR) notes that more than 366,000 refugees have arrived in Europe by sea so far in 2015. And 80% have come from the world’s top ten refugee-producing countries, including half from Syria.

This can be a deadly voyage. The International Organisation for Migration reports that at least 2373 migrants have already died trying to reach Europe this year.

This reflects the immensity of the crisis created by the Syrian conflict. More than 4 million refugees are now in the countries bordering Syria – Turkey, Lebanon and Jordan – while an estimated 7.6 million are internally displaced within Syria.

Individual countries have begun to show leadership. This began with German Chancellor Angela Merkel’s commitment that Germany would begin processing all asylum seekers who applied on its territory. In so doing, she waived the European Union’s (EU) Dublin Regulation, which establishes that asylum seekers must lodge their claim in the first EU country they enter.

Merkel’s plan may lead to Germany taking up to 800,000 refugees this year. She laid out her country’s response in stark moral terms. She argued that:

Germany is a strong country, we will manage … If Europe fails on the question of refugees, then it won’t be the Europe we wished for.

We will do more in providing resettlement for thousands more Syrian refugees.

Prime Minister Tony Abbott has announced that Australia will take a “significant” number of Syrian refugees beyond the 4500 that it has already pledged to accept.

However, the scale of the crisis means that no single country can deal with it alone. Germany’s planwould involve direct EU responsibility for registering and looking after newly arrived refugees in Greece and Italy, as well as creating a common policy on safe countries of origin.

The UNHCR has argued that Europe cannot respond to this crisis “with a piecemeal or incremental approach”. Instead, it has recommended a mass relocation program with 200,000 places, coupled with improved reception capacities – especially in Greece.

But neither Germany’s nor the UNHCR’s plan would deal with the main issue: refugees would still have to risk death crossing the Mediterranean Sea to reach Europe to access these programs.

Others argue for a regional response. One suggestion is the creation of a safe zone, which would allow Syrians to remain within the country. Australian Foreign Minister Julie Bishop has echoed this call.

Ethicist Peter Singer has argued that the affluent countries need to provide much more support to the countries supporting large numbers of refugees. Singer also said that sending asylum seekers to safe refugee camps supported by the developed world would eliminate people smuggling.

But these proposals reflect the flipside of the problem: that the world needs to respond to the refugees crossing the Mediterranean and also assist the countries harbouring the bulk of the 4 million Syrian refugees.

The UNHCR has announced that its budget this year will be 10% less than last year’s, while the World Food Programme (WFP) has had to cut the rations being provided to the refugees. The most vulnerable refugees in Lebanon will have only US$13 per month to spend on food, and the WFP may need to cut all assistance to refugees in Jordan. The UNHCR’s budget for providing support for refugees is 10% lower than last year’s. Reuters/Osman Orsal

What is needed, therefore, is a comprehensive, global program. This would include three elements:

With respect to humanitarian assistance, the UN Syria Regional Refugee Response Appeal is requestingUS$4.5 billion to respond to the situation in Syria and neighbouring countries, but has received only 37% of that total.

This shortfall has been the case since the Syrian conflict began. Most yearly appeals have received only around 50% of the request funding. This has placed immense pressure on both the international aid agencies responding to the conflict and on the refugee host countries themselves.

A safe processing centre model would serve to deter refugees from crossing the Mediterranean and have the advantage of centrally co-ordinating the processing of individual refugee claims. This, in turn,could:

… enable a fairer distribution of responsibilities among states for providing protection and assistance to refugees.

The UNHCR has noted that such centres could be legal under international law if they clearly reflect the international legal standards – including the UN Refugee Convention and the principle of non-refoulement – and have formal authorisation from host nations. The UNHCR would be the obvious organisation to run the refugee determination process within these centres.

Critically, the centres would need to be safe and agreements would need to be made with the individual host countries. Turkey would likely support such an initiative. Given the current insecurity in Libya, however, a centre would either need international protection – such as peacekeepers – even with government consent, or alternatively could be established along the border in Tunisia.

But these centres would not work without a clear onward path for processed refugees. The EU is now discussing possible resettlement numbers. Other than the UNHCR’s proposed 200,000 figure, European Commission President Jean-Claude Juncker has suggested that individual EU states resettle 120,000 asylum seekers who are currently in Hungary, Greece and Italy. Others have suggested higher figures.

A global commitment to take 400,000 refugees – 10% of the Syrian total – from these processing centres in not unreachable. The model here is the Comprehensive Plan of Action, negotiated in 1989 to respond to the Indochinese boat people. The plan included regional screening for refugees and, while not perfect, resulted in the resettlement of more than 500,000 refugees over six years.

Given the nature of the Syrian war, a longer protection period would be warranted.

By combining these three approaches, individual countries would have the opportunity either to commit to refugee resettlement or to fund the centres’ humanitarian operation and costs – or both. Most importantly, these approaches would significantly increase the burden-sharing between the refugee-hosting countries near Syria and the rest of the developed world.

Phil Orchard, Senior Lecturer in Peace and Conflict Studies and International Relations; Research Director at the Asia-Pacific Centre for the Responsibility to Protect, The University of Queensland

This article was originally published on The Conversation. Read the original article. The views expressed in this article belong to the author and do not necessarily represent ForMENA