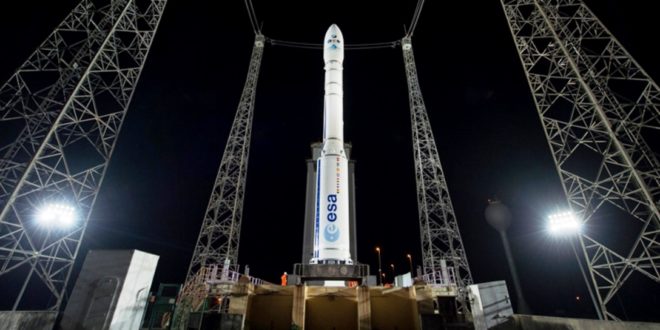 On November 7, Morocco launched its first high-resolution observation satellite into orbit, causing concern among its neighbours Spain and Algeria.

By Ghalia Kadiri, for Le Monde (*)

Buying a satellite is usually a sign of a nation’s power, something to brag about. Not so for Morocco, which kept secret the acquisition of its first high-resolution satellite, the Mohammed-VI A, until its launch on the night of November 7 from Kourou in French Guiana. Images from the powerful Earth observation satellite have a 70 cm resolution and can be taken from anywhere on the globe in less than 24 hours. Morocco is the first African nation to acquire such a powerful surveillance aircraft.

Moroccan officials insist the spacecraft will be used for civilian purposes but the satellite inevitably has military applications also. According to the CNES, France’s National Centre for Space Studies, these kinds of high-resolution images – based on the French imagery system Pléiades – “can also help to identify military installations in enemy countries in order to plan a military intervention.”

“It is true that, if the evolution of road and rail networks can be observed, the Pléiades satellites may be used for secret intelligence,” explained Françoise Masson, head of the CNES Pléiades project.

The Mohammed-VI A was built by the Franco-Tunisian consortium Thales Alenia Space and Airbus. The satellite is the first example of a system comprising of two satellites with a 5-year lifespan, placed in orbit 694 kms from the Earth. The second satellite will be launched in 2018. Once they are operational, these ‘spy’ satellites will have the capacity to take up to 500 photos a day. The images will be collected and analysed by a team of experts in Rabat.

France and Morocco sealed the contract, valued at 500 million euros, behind closed doors in 2013, during the former French president François Hollande’s visit to Morroco. Even after the launch of the Mohammed-VI four years later, the spacecraft’s technical capacities remain shrouded in mystery. To this day, neither the national space agency nor the government have officially communicated about it.

“This is all part of a culture of secrecy, which serves to instill a menacing atmosphere, without being directly threatening,” said Florence Sborowsky, researcher at France’s Strategic Research Foundation (FRS).

Information collected by the satellite will contribute to economic and social development, but also serve the kingdom’s security interests.

“We know that Morocco is at odds with Spain and Algeria regarding certain issues and that the situation is tense at the border with Mauritania. Both these satellites will give Morocco the means to gather intelligence and an independence that no one else has in the region,” commented Sborowsky, who is an expert in civilian and military space issues in the Arab region.

The launched satellite will no doubt help Morocco to keep an eye on illegal immigration, smuggling at its borders and terrorism. “It is true that we consider it our right to be up-to-date. But no one should worry as we have good intentions,” said Mr Chami.

The Spanish military is clearly uncomfortable with the latest development and is worried that “the technological advantage [of Spain], which is based on dissuasion, will be weakened”.

“Morroco is a friend…But we would not like to anyone, even less a friend, to come and pry into our affairs,” a military expert recently told El Pais newspaper. According to him, a number of territorial disputes between both countries are causes for concern: the enclaves of Ceuta and Melilla and five islands off the Moroccan coast have been a source of conflict between both countries for several centuries, as well as their maritime borders.

Spain has fallen behind in matters of surveillance. Madrid does not have its own ‘surveillance’ satellite but contributes 2.5% of the European Helios surveillance programme’s budget with France (which contributes 90%), Belgium, Italy and Greece. This stake is insufficient: during the Perejil Island crisis in 2002 which nearly caused an armed conflict between Morocco and Spain, Madrid could not get hold of satellite images in time.

Morocco’s new satellite is also likely to bother its eastern neighbour Algeria. For the past few years, these countries have been competing in their own space race. “At one point, we thought Algeria was going to overtake Morocco since it was the only country with its own space agency. Thanks to a technology transfer, Algeria helped to build the small satellites Alsat 1 and 2. But with this new powerful spacecraft, Morocco has got ahead,” explained Sborowsky.

Morocco still does not have its own space agency and does not have the capacity to build its own satellites – which is a prerequisite to becoming a major space power.

“Even if it’s not there yet, Algeria wants to develop a real space policy. For Rabat, it’s a strategic tool to increase its power in the region,” added Sborowsky.

Morocco’s latest show of force is convenient for Europeans, especially for France which built the satellite, since it serves its own security interests in North Africa and the Middle East.

(*) This article was originally published on France24 . Read the original article. The views expressed in this article belong to the author and do not necessarily represent ForMENA