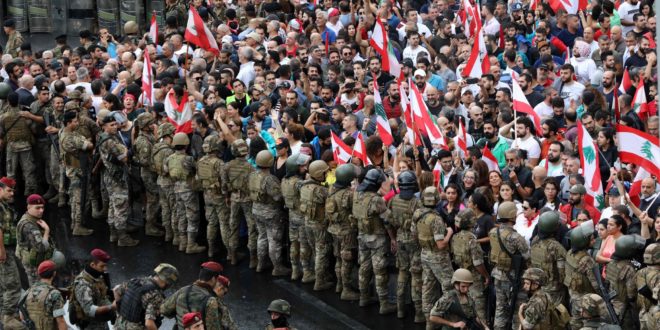 Lebanon battles to be born at last

By Roger Cohen, for The New York Times (*)

BEIRUT — Lebanon was ahead of the game on civil war and now is last to the Arab Spring, or at least an Arab something — a vast, united exhalation of disgust at the thievery, corruption and nepotism that has caused widespread misery across this wounded land.

There they are, the people, citizens undifferentiated, with their suddenly discovered Lebanese flags, outside the Central Bank, demanding that its longtime governor, Riad Salameh, quit, hand himself over to judicial authorities, explain his son’s opulent wedding in France this year, and provide details of money stolen by the government.

“All of them means all of them,” is the revolution’s cry — out with Salameh, and the Maronite Christian president, Michel Aoun, and the Sunni prime minister, Saad Hariri, and the Shia speaker, Nabih Berri, and even Hassan Nasrallah, the leader of Hezbollah, the militant group and political party that is a member of the coalition government.

Nasrallah? Taboos are falling at a giddying pace. Perhaps one million people have taken to the streets, a quarter of the Lebanese population. In this most sectarian of countries everyone stands together, for now.

The unity is fragile. Lebanon, through Hezbollah, is Iran’s proxy on the border of Israel. Hezbollah fought to save Bashar al-Assad in Syria. It won’t let its Lebanese power base go lightly. Already, Nasrallah has started blaming outside forces for the unrest and warned of chaos.

But young Lebanese are tired of being other people’s proxies. They are claiming their own country; hence those flags. Beirut is in lockdown. Banks are closed, businesses shuttered. A speech by Aoun, a week into the protests, was a flop. “Regime change, young fellows, does not take place in the streets,” he declared — and was mocked. The crowds believe that’s precisely where transformation occurs.

What else is new? A leaderless popular movement, propelled by social media, determined — with sudden unity — to overturn the status quo and render justice to the people. From Turkey to Chile, from France to Egypt, from Brazil to Libya, such upsurges of fury and idealism have marked the past decade, only to fail or fade more often than not. To be leaderless is beautiful. It is not necessarily effective.

But this is Lebanon, with its one feeble government, two armies (the state’s and Hezbollah’s), two currencies, 18 officially recognized religious groups, and one thousand conspiracy theories. The current situation cannot hold for long.

The state is weak, the economy on the verge of collapse, and an awakened citizenry unready for compromise with their leaders, whose demands for fealty have spread division and woes. Enough of war and warlords and the sectarian politics of fear! Lebanon is seeking a fresh start.

“This is the first time in our history that Christians, Druze, Sunni and Shia and everyone get together like this,” Rudy Marroum told me, standing outside the Central Bank. “It’s make or break, a last chance for Lebanon. The Lebanese and Palestinians helped build Dubai. They could not build their own countries, so they had to go and build other countries to feed their children.”

Mona Massalkhi stood nearby with her 20-year-old daughter, Leila, an occupational therapist. “We are not a poor country,” Massalkhi said. “We are just governed by thieves. I will stay in the street as long as it takes for the sake of my daughter, who has no future without change.”

I heard elaborate theories — never in short supply in Lebanon — about how the economy is dollarized in order to enslave the country to American interests, and how Salameh, the Central Bank governor for the past 26 years, has facilitated the offshore transfers of vast sums by government ministers, their families and cronies.

The economy, starved of capital inflows, is in free fall, with no growth, high unemployment and huge pressure on the Lebanese pound. Banks have not opened for a week for fear of a panic-driven stampede for dollars.

Garbage piles up. Electricity is intermittent. Sewage spills into the sea. “The only thing we recycle here is politicians,” Paula Yacoubian, an independent member of parliament, told me. The gold necklace she was wearing formed the Arabic word for “Enough!”

Via a back entrance to the Central Bank, across a garage, past a black Audi and BMW, I made my way, through elaborate security, to Salameh’s office. Only a skeleton staff is working. The governor wore a great suit and tie in a dimly lit office redolent of cigars. He was clearly under strain but also indignant about the accusations against him.

“Today, everybody can say whatever via social media,” Salameh, who came to this job from Merrill Lynch, told me. “I have read various so-called biographies of myself, and am discovering I did not know who I was before.” He smiled a wan smile. “My contribution over the years has been to try to hold Lebanon stable.”

It’s not easy, he said, when you have a tiny dollarized economy, where 73.5 percent of deposits are in foreign currency, budget deficits are high, and protecting the currency is a daily battle.

“I don’t know if the government is very corrupt,” he continued, “but I can say I worked very hard to put in place a special investigation commission to combat money laundering and terrorist financing, and I never compromised on this. Those who suffered from my decisions are now trying to drag me down with accusations of corruption.”

The Central Bank, he insisted, had no control over the private bank accounts of government members. “The Central Bank does not handle private accounts. I do not have this privilege. The banks should know their clients and report to us if they see something suspicious.”

As for the supposedly lavish wedding in France, the focus of much ire, Salameh said it took place overseas because his son, a Christian, wed a Muslim and it was easier to have a civil marriage in France. “It was just a normal dinner,” he said.

Salameh was clearly worried. He said he had no idea how the confrontation would end. Small and medium-size enterprises make up most of the Lebanese economy, and for now they have no income, with the country paralyzed. “The solution is not a violent one,” he told me. “You need to regenerate confidence.”

I asked if he would quit. “If it serves the country, but I think it may have the opposite effect, in terms of the confidence of markets.” He paused. “Look, if I am the problem, you can consider it solved. But mobilizing by identifying capital and money as the enemy is not the way forward. We need to build the state and build an economy that has growth.”

Gazing at Salameh, a dignified man in a dire position after decades of entanglement in the Lebanese power web, and recalling the fury outside the bank, I could see no immediate resolution to the standoff. It’s a generational fight for a decent country. The Middle East could sure use one.

Thirty-six years ago I was in Lebanon covering the civil war for The Wall Street Journal. I recall visiting the Central Bank governor then, making my way through rubble and gunfire. Everything is relative. Beirut is not in flames, not yet at least.

In a way, the battle today sees a generation that did not live that war struggling to overcome its legacy at last. It would be a miracle if they succeed, but some new Lebanon has flickered to life these past nine days and will not quickly be snuffed out.