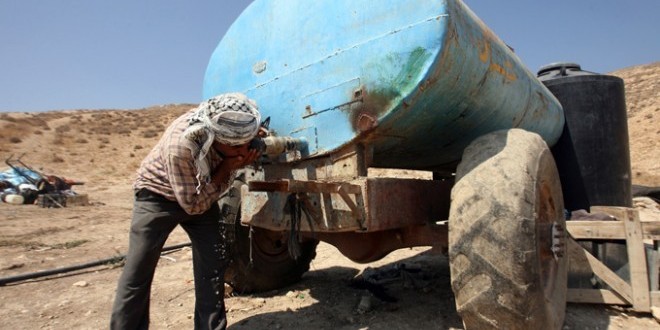 Hope for Peace? Israeli, Palestinian and Jordanian Cooperation Over Water and the Dead Sea.

In the Middle East in particular, over recent years water has become an additional factor of destabilisation and tension, as thirsty countries try through every means to monopolise control of springs. As Jan Selby, Professor of International Relations at the University of Sussex, explains in his book “Water, Power and Politics in the Middle East: the other Israeli-Palestinian Conflict”:

“From a political point of view, the crises of water are finally the product of the disparities, the differences and the conflicts [of the region]”

As such, while the eighteenth-century traditional Korean philosopher and poet, Yun Son Do, asserted that “only water in eternal”, we know today that the question is politicized and thus inspires different analyses.

“Hydrodiplomacy”: the war for water between Israel, Palestine and Jordan

Numerous observers have pointed to the potential of water as a catalyst for conflict. Such figures include former UN Secretary General Boutros Boutros-Ghali, who predicted in 1986 that “the next war in the Middle East will be fought over water, not politics”. With time, such fears have only grown. However, another analysis is possible: rather than a source of war, the scarcity of water may alternatively lead to peace.

It is true that in the past twenty years the question of the water has become the archetypal political question, maybe even more so than those directly concerning peace, territories, borders and populations. This is so due to water’s position at the heart of the modus vivendi of all countries in the region.

In contrast to this conflict-driven analysis, thinkers, politicians, hydrographs and hydrologists have gradually enriched the lexical field of water with new terms. In so doing, they have undermined the concept of the “war for water”, hitherto so prevalent. Speaking about hydric-stress, which refers to the obvious imbalance between the resources and water-needs of the region, “hydrodiplomacy” has been proposed as an alternative paradigm to the eternal “crisis of water”. Scientists connected to this field have been supported by politicians, who have shifted to a cooperative stance over water-issues in recent years.

As such, it is possible that, rather than lead to war because of irresponsibility, good governance and management of water by states can become a factor in rebalancing relations between these regional actors. Even if this possibility currently seems distant, it is possible to imagine that cooperation between Israelis, Jordanians and Palestinians over water-related issues can contribute to a re-configuration of opposing powers and the forces between them.

In a space so reduced as the geostrategic triangle of Israel, Palestine and Jordan, any minor political action of one of the authorities can have a major political impact on the entire region. For example, the political consequences of Israeli irrigation and the diversion of the Jordan River for sixty years now are the reasons for Palestinian and Jordanian thirst. About 70 % of the water consumed by Israel comes from outside its initial borders of 1948 and the question of resolving water-related problems is one of the key issue in peace negotiations.

Diplomacy is the only positive option in regard to water-regulation. Former Israeli Prime Minister Yitzhak Rabin, assassinated in 1995, clearly recognised this when he stated: “if we solve all the problems in the Middle East, but not that of the sharing of the water, our region will explode”.

We need to keep in mind that Jordan is one of the 10 driest countries in the world and that Palestine has been dispossessed by Israel for 40 years, denied the slightest direct control over their water supply – despite the fact that they have the largest reserves of groundwater in the region. The icing on the cake for the Palestinians in this theatre of the absurd is that these countries are surrounded by water: the Mediterranean Sea and the Red Sea.

What is to be done when we predict an imminent drying out of the Jordan, while 98 % of its water is already directly hijacked by Israel and Jordan for their elementary agricultural needs for the next 60 years? The construction of a canal of water-supply connecting the Red Sea to the Dead Sea, or a canal connecting the Mediterranean Sea to the Dead Sea could perhaps provide a solution.

Before the most recent project, the Red Sea-Dead Sea Canal (RSDSC), a number of proposals for canals had been made to join the Mediterranean with the Dead Sea.

During the 20th century, there was a proposal for a conveyance system under the Mediterranean Sea from Turkey towards Israel to meet the needs of the latter. No integration of the Dead Sea in the project was possible at the time. A “Canal of Peace” was also proposed in the 1990s, running from Egypt via the Nile to Israel, between the Dead Sea and the Red Sea.

This common project represented a turning-point in regional perception of ways to resolve the question of the water and the Dead Sea. For the first time, three entities “agreed” to find collective solutions for a common project.

Symbolically, the planned RSDSC would run along the 180 km road on the shore of the biblical Sea of Reeds. While simple on paper, the ambition to transport water from the Red Sea towards the Dead Sea, with all the necessary desalination plants, would entail a major construction project – perhaps taking as long as a decade – in order to succeed. Estimated at 15 billion dollars, the project – conducted by the World Bank since 2008 – should bear fruit in 2020.

There are three major projects connected to the RSDSC which greatly exceed the question of saving the Dead Sea: a major hydroelectric station; the world’s biggest desalination plant; and the canal itself. It is estimated that 2 billion cubic metres of water will be transported every year – 5 million cubic metres a day – from the Red Sea to the Dead Sea. The water is intended for the use of Israel, Palestine and Jordan. For security reasons, the infrastructure will be built on the Jordanian side of the border.

In order to present the project as a truly regional initiative, Tel Aviv should accept the proposal that the canal crosses neither Israel itself, nor the occupied Palestinian territories. It was Israeli intransigence and Jordanian concern over these points which scuppered the “Med-Dead” canal proposal in the 1990s. Intended for three countries, including the most water-poor nation in the world, the current project appears to have more potential to gain the support of the international community.

Admittedly, the political, technical and environmental problems remain numerous. These include the expulsion of Bedouins, the economic profitability of the project and proposed construction of hotel and seaside complexes damaging to the natural environment, the uncertainties as to the result of mixing “red” with “dead” water, the destruction of the ecosystem through the transformation of the banks of the Dead Sea and the major financial cost of the project. There is also opposition from Palestinians, who desire an alternative solution and dispute Israel’s occupation of the banks of the Dead Sea, which began in 1967 and continues to this day. If built, the canal would arguably further entrench this “fact on the ground”.

Nevertheless, in December 2013 Israelis, Palestinians and Jordanians found themselves in Washington to agree a new stage in the project and launch the 15-billion-dollar fund-raising campaign to cover some of the proposed canal’s colossal costs. In the words of Sylvan Shalom, the Israeli Minister of Water and Energy, the meeting offered “a glimmer of hope on the possibility of overcoming other obstacles in the future”. His Palestinian counterpart at the time, Shaddad Attili, similarly stated that “we showed that we could work together in spite of our political problems”.

It remains to be seen, however, whether the latest canal proposal will ever see the light of day.