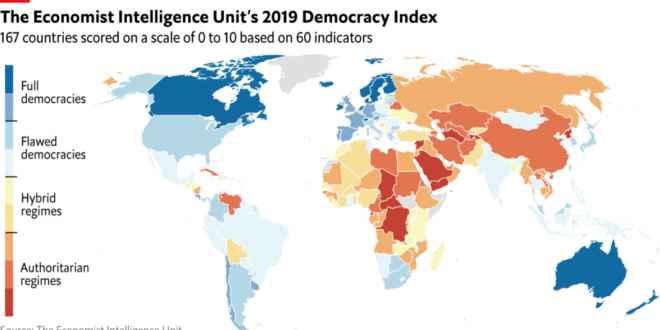 Global democracy has another bad year

Global democracy has had another bad year, but popular protests show the potential for democratic renewal, The Economist Intelligence Unit reports.

After showing stagnation in 2018, the EIU’s Democracy Index – which assesses the global state of democracy – deteriorated once again in 2019 to the lowest global score seen since the index’s inception in 2006.

The Democracy Index for 2019 found that democratic backsliding across the world has led to the worst score since the index was first produced in 2006, with only 5.7 percent of the global population living in what could be considered a “full democracy,” POLITICO adds:

The index assessed 167 countries on the basis of five categories: electoral process and pluralism; the functioning of government; political participation; political culture; and civil liberties. Most Western European countries were considered full democracies, with Norway scoring the highest worldwide, while most Eastern European nations were considered flawed democracies or “hybrid” regimes.

Other key findings in the report include:

The decline in the average global score in 2019 was driven by a sharp regression in Latin America and Sub-Saharan Africa, a lesser one in the Middle East and North Africa (MENA) region, and by stagnation in the four other regions covered by the Democracy Index. Latin America was the worst-performing region in 2019, recording a fall of 0.11 points in its average regional score compared with 2018, to 6.13. Starting from an already low base, the regression in Sub-Saharan Africa was also striking: the average regional score fell by 0.10 points year on year, to 4.26. The democratic deterioration in the MENA region was more modest but followed a trend of steady regression since 2012, when the gains of the Arab Spring began to be reversed. The average score for Asia and Australasia, eastern Europe, North America and western Europe stagnated in 2019.

“If 2016 was notable for the populist insurgency against the status quo in the developed democracies, 2019 was defined in large part by a wave of popular protest in the developing world,” said Joan Hoey, the editor of the report. “Both expressed a demand for more popular sovereignty and better political representation and both hold out the potential for a regeneration of democracy.”

According to The Economist Intelligence Unit’s measure of democracy, almost one-half (48.4%) of the world’s population live in a democracy of some sort, although only 5.7% reside in a “full democracy”, down from 8.9% in 2015 as a result of the US being demoted from a “full democracy” to a “flawed democracy” in 2016. More than one-third of the world’s population live under authoritarian rule, with a large share being in China. In 2019 some 68 countries experienced a decline in their total score compared with 2018, but almost as many (65) recorded an improvement. The other 34 stagnated, with their scores remaining unchanged compared with 2018.

There were some impressive improvements and some dramatic declines. There were ten changes of regime category, six positive and four negative. Three countries (Chile, France and Portugal) moved from the “flawed democracy” category to become “full democracies”. Malta moved in the opposite direction, becoming a “flawed democracy”. At the other end of the democracy spectrum, Algeria moved from being an “authoritarian regime” to a “hybrid regime”, while Iraq and Palestine went the other way and became “authoritarian regimes”. El Salvador and Thailand moved out of the “hybrid regime” category into the “flawed democracy” category, while Senegal went the other way. Norway topped the Democracy Index global ranking in 2019 and North Korea remained at the bottom.

(*) This article was originally published on Foreign Policy.  Read the original article. The views expressed in this article belong to the author and do not necessarily represent ForMENA