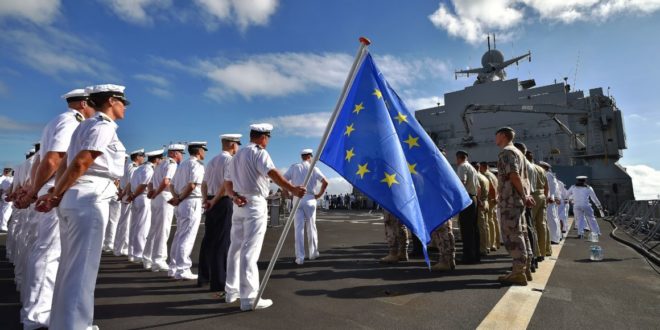 By Alexandra Brzozowski, for EURACTIV (*)

EU foreign ministers agreed on Monday (17 February), after Austria lifted its veto, to deploy a combined aerial and naval mission, with a terrestrial component, and enforce a porous UN arms embargo in and around war-torn Libya.

The decision – whose details will be finalised in the weeks ahead and agreed at the next EU foreign affairs meeting in March – came after weeks of fruitless negotiations and warnings by the EU’s chief diplomat, Josep Borrell, that the bloc risked “paralysis” in its foreign-policy making, potentially leaving Libya’s fate to Turkey and Russia.

“We agreed to launch a new operation in the Mediterranean, Operation Sophia will be closed,” Borrell said. “This new operation will have as a goal to implement the arms embargo imposed by the UN Security Council.”

Operation Sophia – whose aim was to prevent human trafficking in the Mediterranean – stopped deploying ships last March after Italy said it would no longer take migrants rescued at sea.

However, the new mission is expected to have aerial, satellite and maritime,’ elements rather than being a pure naval mission.

Initially, Borrell had hoped to revive Operation Sophia, with one compromise being to use aircraft, rather than ships, to monitor arms smugglers who supply Libya’s two rival governments.

On the sidelines of the Munich Security Conference last weekend, where participants at follow-up talks to the Berlin Libya Conference reaffirmed their commitment to secure the ceasefire, German Foreign Minister Heiko Maas, urged the EU to agree on a naval mission, saying overflights would not be enough.

On 19 January, the twelve participating states pledged to end military support for the civil war combatants and uphold the UN arms embargo, in place since 2011.

However, repeated violations of the embargo have since been reported.

UN deputy envoy for Libya, Stephanie Williams, said the truce in Libya is only hanging by a thread, and the economic situation is deteriorating. “The arms embargo has become a joke,” she said.

“In accordance with the agreed mandate, the mission will have a different area of operation than Operation Sophia, which previously was covering the whole Libyan coast,” Borrell told reporters.

“But if we want to secure the arms embargo, we have to concentrate our attention to the Eastern part of the Mediterranean, where the arms are coming from,” he said, adding that EU military staff will define the area of operation in accordance.

The EU’s chief diplomat added that EU27 acknowledged “legitimate concerns” of some member states regarding the mission’s potential impact on migration flows and indicated this will be “carefully monitored and reported to the operation commander”.

However, EU foreign ministers agreed that should the EU consider that migrants appear near the mission’s field of operation with the goal of being rescued, the “maritime assets will be withdrawn from the relevant area,” Luxembourg’s foreign minister Jean Asselborn said.

In a compromise to assuage Austria’s concerns that any naval mission could help more migrants reach Europe, EU ships will hail and inspect suspicious vessels in the eastern Mediterranean, where most arms smuggling takes place, away from migrant routes.

Austria’s Foreign Minister Alexander Schallenberg said the compromise was acceptable, but Vienna would remain vigilant for any signs that the mission, which will take several weeks to set up, was attracting migrants to Europe.

Hungary, whose right-wing government has taken a tough anti-immigration stance, is understood to have supported Austria’s objections.

After the meeting, Borrell emphasised he was satisfied with the outcome because earlier the day consensus did not appear within reach as Austria was still blocking

Speaking in Munich on Sunday, Borrell said it was unacceptable that Austria, a country without a navy, could block an EU naval mission.

“We should be able to act … not every day making comments, expressing concern,” he added, effectively once again calling on the bloc to abolish unanimity in foreign policy decisions.

(*) This article was originally published on EURACTIV. Read the original article. The views expressed in this article belong to the author and do not necessarily represent ForMENA