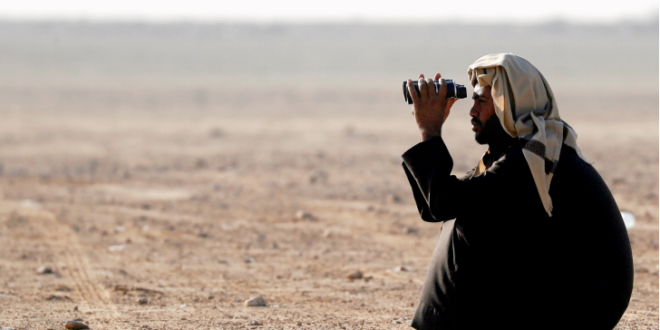 By Borzou Daragahi, for The Independent (*)

The most volatile region in the world is about to be plunged into further chaos because of climate change, academics and international officials warned at a conference on Tuesday.

Food scarcity and water shortages will add to the flood of displaced people, sparking wars and providing opportunities for extremist groups, they said.

These developments will mean 7 to 10 million people in the Middle East and North Africa will be forced to leave their ancestral or temporary homes over the next decade, a UN development official predicted.

Others speaking at a panel at the annual Planetary Security Initiative in The Hague cited small and large conflicts in the region over the years, including food riots in 2008 in Jordan, and identified other future hotspots in the Levant and north Africa.

“Food and fuel insecurity can very quickly lead to unrest,” said Jamal Saghir, a professor at McGill University in Montreal.

“It’s likely that such shocks will happen again. Such crises might trigger violent crisis and increase public support for extremist groups offering viable alternatives,” he told attendees at the conference. “Terrorist organisations like Isis also capitalise on climate change to get new members. They find impoverished farmers to take advantage of – they are offered food, salaries, and other advantages.”

First launched in 2015, the Planetary Security Initiative is a conference sponsored by the Dutch government and several international organisations to address climate change and associated crises. It seeks to broaden the definition of security beyond weapons and borders to include daily sustenance.

Scholars and policymakers have already attributed events to a decades-long drought that has afflicted on the Middle East. During the opening talk, the Iraqi ambassador showed a chart that traced average rainfall in Baghdad collapsing and temperatures rising consistently over the last decade.

The changing conditions contributed to unrest in Syria and Iraq and other nations were plunged into chaos in the 2011 Arab Spring uprisings. Isis subsequently gained traction. The troubles are far from over, with warmer temperatures leading to less water, for example along the Tigris and Euphrates rivers that nourish Iraq.

“In Iraq, what is projected is the reduction of rainfall or snow in the headwaters,” said Nadim Farjallah, a professor specialising in climate change issues at the American University of Beirut. “The Middle East has all the problems now and all it needs is a spark. We already have all the tinder there.”

Adding to the complications, the Middle East region imports 65 per cent of its grain, with the numbers increasing, making governments and populations even more vulnerable to market shifts or climatic changes in other regions. “The region is completely dependent on the sustainable management of agriculture in other parts of the world for its food security,” said Johan Schaar, of the Stockholm International Peace Research Institute.

The UN and other development agencies are nibbling at the edges of the looming crisis. They’ve established a fund to find water solutions for Egypt, where the bulk of its nearly 100 million population live along the Nile. Kishan Khoday, a UN official focused on Middle East issues, described an initiative to bring solar energy to Somalia and manage underground water resources.

Participants spoke of the urgent need of making governments and the public more aware of the need to manage water and other natural resources. “We need to weave climate change more systematically into our analysis of what’s happening in the region,” said Elizabeth Sellwood, an official of the UN’s environment arm.

In Jordan and Gaza, international officials have launched efforts to find sustainable sources of agricultural water.

But in the end, many at the conference were sceptical that either policymakers or populations had a sense of the looming threat and the waves of crises still ahead.

“We’re looking at a situation of rising scarcity due to climate change and people on the move being the new normal,” said Tessa Terpstra, the Netherlands’ envoy for water matters in the Middle East.

A  handful of governments – including those of Jordan, Tunisia and Morocco – have begun to address the issue of climate change. The preamble to Tunisia’s landmark 2014 constitution stresses “the preservation of a healthy environment that guarantees the sustainability of our natural resources”.

But for the most part, governments are blithely ignoring the issue, especially those wealthy Arabian peninsula states dependent on the export of oil and gas. “Between the talk and the walk there’s a major discourse that needs to be addressed,” said Mr Saghir. “I don’t think the political will is there.”

(*) This article was originally published on The Independent . Read the original article. The views expressed in this article belong to the author and do not necessarily represent ForMENA