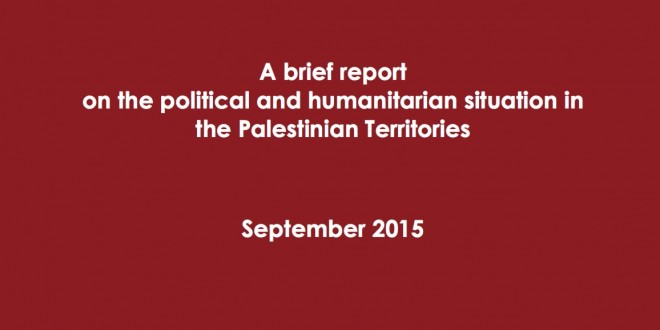 A whole year has passed since the end of the latest Israeli war in July 2014, that the Israeli government named “Operation Strong Cliff” and which targeted the Gaza strip. According to some reports issued by the international and human rights institutions, this war has had the following consequences:

On the basis of the above, The Council for MENA Affairs “ForMENA” followed up during the last year all the political, social and economic developments in the Palestinian territories in the West Bank, Jerusalem and Gaza strip. From the reports issued by international bodies and local institutions, as well as the positions and opinions perceived through the network of our relationships with many academics, politicians and activists from the local community and civil society. The international, regional and Palestinian actions have not had any concrete effect that would mitigate and solve the problems that were faced by the local population in the Palestinian territories at all levels. This can be described as follows:

First: The peace process and the political track

The Palestinian efforts successfully led to the UN recognition of the Palestinian State and the adherence of the State of Palestine to the international organizations. The Palestine Liberation Organization and the Palestinian Authoritycontinue their efforts towards the resumption of the peace process, but this could not lead to the constitution of an international pressure group that would force the Israeli Government to resume the peace process with the Israeli obstinacy and the perseverance of building settlements, dividing the cities of West Bank, and the continuing of Judaization of Jerusalem. In addition to the repeated aggressions by the settlers against the civilian population in the West Bank villages and cities and the continued the siege on Gaza and the delayed reconstruction process due to obstacles imposed by the Israeli policy on the crossing points.

1. The Gaza Strip was the subject of the Beach Agreement (April 2014) signed by Fatah and Hamas. As a direct result of this agreement, the national unity government was constituted but this government was only formal and made no effective achievements that would reestablish the legal and service link of its institutions between the West Bank and Gaza Strip. It also failed to start the reconstruction of Gaza after the last war and brought no solution to the issue of displaced persons staying in shelters and temporary residences. The political divergence between Hamas and Fatah prevented the national unity government from putting in force its mutually agreed competence.

3. The Palestinian Territories have been witnessing a general decline in the public freedoms due to the impact the political differences have on the civil society organizations and personal freedoms and the security control. In West Bank, the Palestinian Authority security agencies increasing the use of Law as a tool for settling political differences along with the ongoing arrests on the basis of political reasons. In Gaza Strip, Hamas security agencies also continue monopolizes the control over Gaza Strip, violates the public freedoms, imposes constraints on the local population and operates arrests on the basis of political affiliation. It also refuses to offer any concessions that would allow the national unity government to exercise its prerogatives especially the control of the Gaza crossing points in order to start the reconstruction process.

The socioeconomic situation in the Palestinian Territories is witnessing a serious decline due to the increase of the number of young unemployed graduates, with a high cost of living and an income level not matching the prices. According to the 2014 local and international reports, the poverty rate in the Palestinian Territories reached 40% and the unemployment rate amongst the youth 43.7% although 50.5% of them are university graduates. Many shocking reports on the humanitarian situation in Gaza Strip were recently issued by the international agencies. The UNRWA latest report mentioned that 52% of the Palestinian people in the Gaza Strip live below the poverty line, whereas the unemployment rates reached 45% at the beginning of the current year. All this with complete absence of any clear development plans aiming at facing the challenges with the continuation of political and legal separation between Gaza Strip and the west Bank. In addition, the human segregation caused by the Israeli government practices in the West Bank and the tightening of the blockade on Gaza, which is likely to aggravate the humanitarian situation of the local population in the Palestinian Territories.

Thus, The Council for MENA Affairs “ForMENA” calls for: