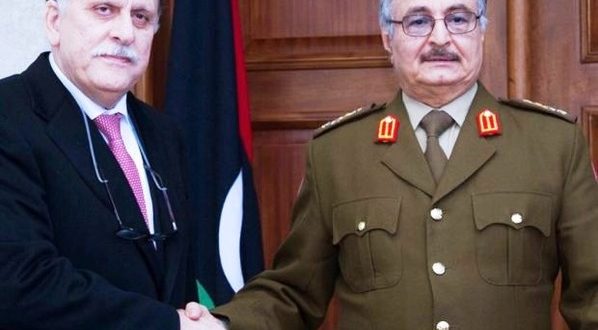 By: Patrick Wintour Diplomatic editor, at The Guardian (*)

Talks between leaders of the two largest rival factions in Libya appear to have reached an outline agreement in probably the most optimistic moment for the war-torn country in many years.

In a diplomatic breakthrough the leader of the UN-backed government, Fayez al-Sarraj, and his rival Khalifa Haftar met on Tuesday in the United Arab Emirates for two hours.

They are scheduled to hold further talks with the Egyptian president, Abdel Fatah al-Sisi, next week. Sisi has been critical to the stop-start reconciliation process, along with Italy and the UAE.

Libya has been wracked by internal divisions ever since the ousting of Muammar Gaddafi in 2011 led to the collapse of the economy and oil production, and to a political vacuum in which human trafficking has proliferated, resulting in mass deaths of refugees trying to cross the Mediterranean to Europe.

Control of the country is split between the UN-backed government in Tripoli and forces loyal to the parliament in the eastern city of Tobruk, which are commanded by Haftar.

No official statement was issued after the Abu Dhabi talks but the unconfirmed reports – initially mainly coming from media sources allied to Haftar – suggest fresh elections will be held within six months and the UN-backed government’s presidency council reduced to three from nine members.

One of the three would be the head of Libya’s Tobruk-based parliament and another the head of the armed forces.

The UN has been opposed to the head of the armed forces being in full political control of the country and the proposal puts the position within a clear political framework. At the same time an agreement to hand all military appointments to politicians would be revoked.

There is also said to be an agreement on identifying terrorist groups outside the political process and a fresh call to disband militias.

Haftar controls two-thirds of the country, leaving the UN-backed government increasingly isolated in the capital and unable to deliver basic services. His supporters insists he has never sought to establish a military dictatorship.

The agreement reportedly also calls for an end to foreign interference in army and security affairs. Arms have been supplied by foreign powers across Libya’s porous borders ever since the fall of the Gaddafi regime in a Nato-backed operation.

The EU has also been training the Libyan coastguard in an effort to stem the flow of migrants across the Mediterranean, and the UN has been trying to develop a presidential guard.

In a statement welcoming the fact that Hafter and Sarraj had finally met on Tuesday, the UAE lauded “the positive atmosphere of the talks and praised the determination shown by the two sides to reach a solution to the current political stalemate in Libya”.

Many British Conservative politicians believe the UK – in supporting Sarraj – has backed the wrong, or ineffective side, but recognise any political agreement will be hard to secure on the ground owing to multiple sources of power in Libya.

UK and US officials are due to discuss its stance at meetings in London next week. There are signs that the US are supporting the process, even by suggesting the Libyans could come to Washington for meetings in June.

The French foreign affairs department broadly welcomed the developments in Libya saying it “supports all initiatives aimed at strengthening the dialogue between all the parties in Libya.”

Any decision in the agreement on fighting terrorism could however be hard to implement if, as reported, militia forces the Shura Council of Benghazi Revolutionaries and the Benghazi Defence Brigades are to be classified as terrorists because of their ties to al-Qaida. Such a move would almost certainly be rejected by a number of groups in Misrata as well as those allied to the country’s grand mufti, Sheikh Sadik al-Ghariani.

Mattia Toaldo, Libyan expert at the European Council on Foreign Relations questioned whether the outline agreement would ever be implemented. “It is significant if Haftar has agreed to a shift in his strategy and said he will stand in elections by March 2018. It is very much Egypt’s strategy.

“If he does win those elections, he would be able to say he has a new legitimate right to get back into Triploi the capital. But it is very doubtful it would be possible to run free and fair elections, and it is not clear why Sarraj, or the Islamist militias in Benghazi that have been supporting him, would agree to this process since he is quite likely to lose, or find themseleevs designated as terrorist groups.”