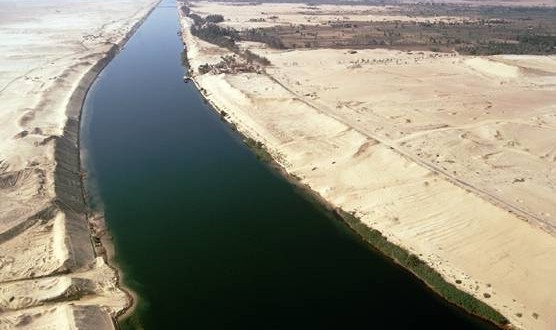 A Pharaonic Project Around the Suez Canal for 2015, a Chance for Egyptian Economic Crisis

Water is a crucial element for the survival of man in the world and particularly in the Middle East and an unavoidable aspect of development. Circulation of men, goods and boats also need the water cross countries.​

The Suez Canal was one of the most impressive human hydraulic proejcts of the nineteenth century. Inaugurated in 1868, about 180 km long, for the first time in History it allowed boats to reach Europe and Asia as fast as possible at the rate of about 50 boats a day, that is about 18,000 a year. The canal, more than 150 years after its digging, remains a unequalled technical feat: the longest ship canal in the world (the Panama canal between the Atlantic and Pacific Ocean is only 80 km), the rate of accidents is almost nothing compared with the other big canals, permanent day and night movement, and a VTMS guidance system.

It become a major political and geopolitical tool of Pan-Arabist rebirth under Nasser, was disputed by the Europeans and Americans in 1956 against the Raïs who challenged western companies by nationalizing the canal. Today, it is the first economic and financial source of the country.

58 years after the effective nationalization of the Canal, Egyptian president Sisi launched the construction of the doubling of the canal last summer. From next August the 6th, not less than 100 boats will join Europe or Asia via the Suez Canal. The construction, thrown in last August, of a second 72 km convey, will allow the reduction of the
duration of the passage of each ship. The construction site exceeds widely the doubling of the Suez Canal, because it will see the transformation of the whole region in a ” World Center of Complementary Works”, as Egypt calls it. It is thus a major economic construction work for the country because it would aim at the indirect creation of a million jobs, and would largely solve the economic crisis which has affected the country for years. The region of the canal would see the setting-up of ship repair companies, companies of towing and assistance to ships, diverse but also tourist industrial complexes of Port Said in Rafah region.

The financial fallout will be enormous for the country: 10 billion dollars for the only canal and in projection about 100 billion dollars a year for the whole regional construction site. It is true that for almost 20 years, the tourist industry has been down since the attacks of Deir El Bahari in 1997. Moreover, the country has to boost its economic growth since the 2011 revolution, Hosni Moubarak’s departure and the concerns of the democratization for the investors. Egypt remains the biggest Arab Country, and tries to reposition in the region and in the world. It was the heart of the Arabic revival in the 1950s, the headquarters of the Arab League left the country after the signature of the peace with Israel in 1978 but returned to Egypt later. It could again become a major political and economic pole in the face of the rise of Turkey over the last ten years.

Egyptian society is already very present and an example of dynamic civil society for the whole Arab world which followed its revolution. Finally, the financing of the canal remains purely Egyptian, the government had issued an appeal to the donations at the level of 6 billion Euros. Within one week, the people had completely contributed to the cost of the project to 6.4 billion Euros. 80 % of the shares were bought by individuals, 20 % by companies. Freedom begins with independence. The economic success to come from the country will be due only to itself.