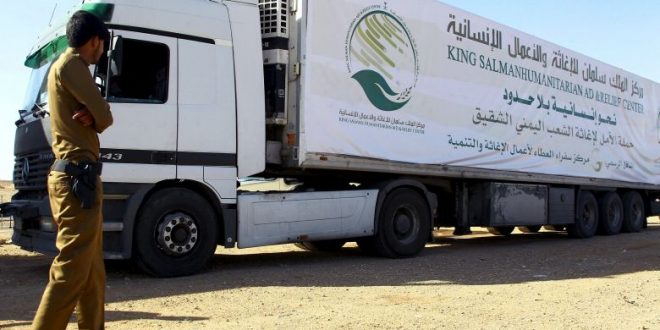 By: Saeed Kamali Dehghan and Karen McVeigh, for The Guardian (*)

The UN has been promised half the amount requested for its humanitarian appeal for Yemen, secretary general António Guterres has said, as activists on the ground said relief was being prevented from reaching its recipients.

Donors at a fundraising conference in Geneva pledged sums to take the total promised to $1.1bn (£860m), in a $2.1bn appeal that was only 15% funded previously.

The UN launched its appeal to prevent famine in the Arab world’s poorest nation two months ago.

Guterres said the country was facing “a tragedy of immense proportions”. “On average, a child under the age of five dies of preventable causes in Yemen every 10 minutes,” he said. “This means 50 children in Yemen will die during today’s conference, and all of those deaths could have been prevented.”

The conference came as two dozen Yemenis ended a week-long protest march from the capital Sana’a to the port city of Hudaydah. The 140-mile “march for bread” aimed to call on the international community to protect Hudaydah, which is the main entry point for aid.

The food crisis in Yemen has been made worse by the ongoing conflict between Houthi rebels controlling Sana’a allied with former president Ali Abdullah Saleh, who led the country from 1990 to 2012, and forces loyal to ousted president, Abdu Rabbu Mansour Hadi.

Since March 2015, Saudi Arabia has led US-backed military intervention in Yemen aimed at reinstating Hadi, who lives in exile in Riyadh, and countering advances of the Houthi forces, which are backed by Iran.

Hisham Al-Omeisy, a political analyst based in Sana’a, said people in Yemen were not optimistic about the prospects of international aid. “Without putting an end to the war, ending the Saudi-led coalition’s blockade and corruption of factions in the ground, I’m afraid there will be many more aid conferences to come and no supply will ever be enough to meet demand,” he said.

Omeisy said previous UN appeals were only partially funded and even if the current level of 15% rises to just above 50%, as similar to the previous years, “it still falls short of addressing all the needs, and with the still rapidly deteriorating humanitarian situation with the continuation of the war”.

He said: “The current conditions on the ground [are] hindering delivery and distribution [of aid] – little is trickling in and reaching the actual deserving recipients.

“On the one end, the Saudi-led coalition is enforcing a commercial blockade and restrictions on relief supplies. Ninety percent of imports are food, fuel, and drugs: the blockade is choking the country that is heavily reliant on imports, and unreasonable delays in inspection as well as rejections of letting aid through.

“On the other hand, local groups and warlords are also hindering delivery of aid, and at times [there is] outright looting and selling on the black market. While Houthis block access to besieged cities like Taiz, others from both sides of the conflict, including the Saudi-backed Yemen government, are making huge profits creating shortages and spiking prices of certain items such as fuel and gas.”

Sherine El Taraboulsi-McCarthy, a Yemen expert and research fellow at the Overseas Development Institute, said she was very disappointed at the lack of recognition for the role of Yemeni people and civil society at the Geneva conference.

“I’ve read the statements coming from the UK, Sweden and others,” she said. “The supposition is that governments in the west and the Gulf will decide how aid is delivered, but organisations like ICRC and the Red Cross have very little capacity on the ground without local actors.”

She and others in the aid community called for more attention to be given for a political settlement and for both parties to be held accountable to international humanitarian law.

There was a disconnect between Saudi Arabia’s pledge of $150m and the “impunity of their actions in international law” she said. “It is the responsibility of the international community to ensure that disparity should not be taken lightly.”

The UN office for the coordination of humanitarian affairs said ahead of the conference, co-hosted by Sweden and Switzerland, that more than 18 million people were in need of humanitarian or protection assistance, and that severe food insecurity was affecting more than 6 million. According to the World Food Programme, nearly 2.2 million children are malnourished, of whom half a million need urgent care to prevent imminent risk of death.

“We are witnessing the starving and the crippling of an entire generation,” Guterres said, insisting that “a famine can be prevented if we act quickly and commit to funding crucial life-saving assistance … We must act now to save lives. We are here today to turn the tide of suffering and create hope.