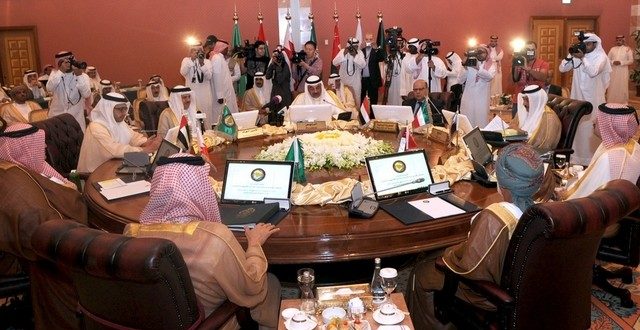 Can a soccer tournament help end The GCC crisis?

By Khalid Al-Jaber and Giorgio Cafiero, for LobeLog (*)

Saudi Arabia, the United Arab Emirates (UAE), and Bahrain’s football associations recently announced that they would participate in the Arabian Gulf Cup football tournament, which begins tomorrow. As many experts have posited, the reversal of these three countries’ previous decision to boycott the event brightens the prospects for resolution of the Gulf Cooperation Council (GCC) crisis. According to a recent Bloomberg report, efforts to resolve the Gulf dispute have been “gathering momentum.” Indeed, such efforts have successfully stopped the media campaigns between Qatar and the blockading states, while Kuwaiti Deputy Foreign Minister Khaled al-Jarallah said recently their decision to participate was “a clear indication of the progress towards solving the Gulf crisis.”

The decision to participate in this month’s Arabian Gulf Cup football tournament followed a recent remark from a senior Saudi official in Washington about Doha “taking steps to repair relations with its neighbors.” One country that cannot be ignored here is Oman, which has long believed that GCC member states among themselves and in terms of their relations with the Islamic Republic of Iran must find diplomatic solutions to regional problems and always pursue dialogue. Earlier this month, Saudi Deputy Minister of Defense Prince Khalid bin Salman met with His Majesty Sultan Qaboos in Oman the same day that Oman’s oil minister was in the Emirates discussing the importance of maintaining dialogue with the Iranians. Such diplomatic exchanges came against the backdrop of tireless diplomacy on the part of Kuwait’s Emir Sheikh Sabah al-Ahmad al-Sabah to bring Qatar and the blockading states toward reconciliation.

It is important to ask why Saudi Arabia, the UAE, and Bahrain appear to be moving toward a softer position vis-à-vis Qatar, which the Omani and Kuwaiti leaderships have been pushing for since the blockade began in June 2017. There is no denying that both Tehran and Washington are important variables in this equation. Escalations in the Gulf since the act of sabotage off the UAE’s east coast in May, up until the Saudi Aramco attacks in September, and pressure from the U.S. administration on GCC states to unite against Tehran have played major roles in prompting Riyadh and Abu Dhabi to reassess their positions on Qatar.

The drone and missile attacks which struck Saudi Arabia’s oil installation at Abqaiq and its oil field at Khurais highlighted the extent to which the kingdom is vulnerable to real threats from Saudi Arabia’s regional adversaries. Thus, the severity of the attack—and the precision on the part of the actor that carried it out—appears to have prompted the Saudi leadership to understand the importance of addressing genuine security challenges rather than fabricated threats.

Furthermore, with Riyadh and Abu Dhabi realizing that President Donald Trump’s words are often not backed up by actions, there has been disappointment with his leadership. There is an understanding in these two Gulf capitals that the White House will not back them up vis-à-vis Iran as they were initially led to believe earlier on in his presidency. Andreas Krieg, assistant professor at the Defence Studies Department of King’s College London, put it: “The then newly inaugurated president promised America’s Gulf allies in 2017 to support more zero-sum policies in the region, empowering local partners to make the Arabian side of the Gulf great again vis-a-vis Iran. But Trump did not deliver.”

Simultaneously, the Saudi and Emirati leaderships sought to please Trump’s administration with their war of narratives against Doha, yet given Qatar’s extremely close relationship with Washington (and Trump’s administration in particular), officials in Riyadh and Abu Dhabi are contending with the fact that their inability to bring the White House on board with their anti-Qatar campaign has been an abject failure.

Last month, when Trump decided to withdraw some U.S. military forces from a certain part of Syria, which served to green-light Turkey’s incursion against the Kurdish People’s Protection Units (YPG), the Saudis and Emiratis grew more unsettled by the state of U.S. foreign policy. The move on Trump’s part reinforced the view that the current administration lacks any vision or long-term thinking for the Middle East, making the perception of the U.S. in the Gulf as increasingly unreliable. Concerns about Washington withdrawing from the Arab world has prompted Saudi Arabia and the UAE to revisit basic questions about how to address regional challenges.

This reassessment on the part of U.S. allies in the Gulf helps explain the Emiratis’ diplomatic overtures to Tehran and moves away from such direct involvement in Yemen as well as the Saudi leadership’s decision to engage the Houthis in order to wind down the Yemeni conflict. Signs of Riyadh and Abu Dhabi moving toward reconciliation with Qatar must be understood in this context too. Yet if Qatar does not meet any of the 13 demands laid out by the blockading states in 2017, Riyadh and Abu Dhabi will have to contend with the risks of appearing weak in the face of Doha’s resilience. Given the unlikelihood of the Qataris closing down Al-Jazeera, severing links with Iran, or shutting down Turkey’s military base in Qatar, it is a safe bet that such perceptions of weakness on the blockading states’ part will grow.

At this juncture, with the GCC crisis appearing to wind down, it is intriguing to examine how a sports event could possibly be the first door to open when moving toward the end of the Arabian feud, and whether the next GCC summit in December can herald a period of reconciliation between Doha and the blockading states. Nonetheless, even if Riyadh, Abu Dhabi, and Manama restore relations with Doha, it is next to impossible to imagine the ties between these Gulf capitals returning to the business-as-usual of the pre-blockade days.

The impact of the siege of Qatar will last for a significant period of time, framing national discourse and narratives among a generation of Qataris who experienced the blockade at a young age. As the social ramifications will last for the foreseeable future, it would also be tough to expect Doha to unwisely restore the types of trade and economic links which Qatar once had with Saudi Arabia that made the small emirate vulnerable in mid-2017. The reality is that Qatar moved on after the siege began and established new kinds of partnerships with a host of countries—namely Turkey and Iran—that Doha would not walk away from even if the GCC crisis ended tomorrow. Thus, imaging Qatar aligning closely with Saudi Arabia against Iran in a much discussed “Arab NATO” or Middle East Strategic Alliance (MESA) would require overlooking the countless ways in which Doha’s ability to trust its immediate Arabian neighbors has been severely diminished.

Ultimately, officials in Doha realize that it would be far too risky for Qatar to orient its foreign policy back to the Arabian fold in ways that would make Doha dependent on a GCC framework like Qatar was in previous periods of modern history. Although resolving the Gulf crisis could serve as a stabilizing development throughout the greater Middle East, the end of this rift will not bring the GCC back to the pre-2017 period. Instead, what could possibly begin in the near future is a new era in the sub-regional institution’s nearly four-decade-old history.

(*) This article was originally published on LobeLog. Read the original article. The views expressed in this article belong to the author and do not necessarily represent ForMENA