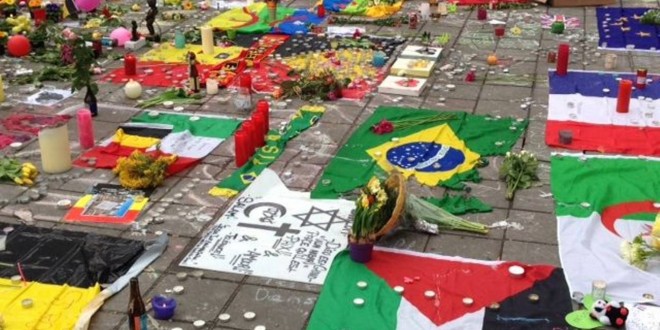 In the early hours of Tuesday morning, ISIS militants carried out two of the most horrific terrorist attacks in Belgian history. These incidents – executed by individuals likely linked with those who were involved in the 2015 November attacks in Paris – underscore the deepening challenge that extremism poses to European society’s cohesion, security, and future.

Will this day be the nail in the coffin for the Schengen zone as EU leaders already grapple with the humanitarian challenges of Syria’s refugee crisis? Will this day further empower far right who try to capitalize on these challenges for their own political advancement?

While it’s not immediately clear the nationality of those involved in the attacks at Brussels’s airport and a metro station near the headquarters of the European Union, which resulted in the tragic death of over 30 people, the challenge of radicalized Europeans going to Syria to fight and return to their countries of origin to engage in terror can’t be under-estimated.

As these horrible events in Paris and Brussels illustrate, the challenges posed by foreign extremist groups and domestic homegrown terrorism require more cooperation and better intelligence sharing. Efforts need to be increased to disrupt and dismantle these networks in Europe and their financing.

Border security across the EU needs to be tightened and Brussels needs to work more with regional states including Turkey, Iraq, Russia, Jordan, and Saudi Arabia in helping monitor and track individuals leaving the battlefields of Syria and prosecuting them.

Equally so, despite some US Presidential candidates’ vitriolic rhetoric, the attempts to scapegoat Syrian refugees who are fleeing violence as part of this wave of extremism and violence in Europe is both unethical and irresponsible. Without a sustainable plan to secure these displaced persons’ future (with the recent agreement with Turkey an initial step), their failure to be welcomed into European states or resettled elsewhere will have long-term economic and security implications.

Instead of focusing solely on these refugees as a threat to EU security, greater efforts need to be taken to counter violent extremism in these states’ societies through effective homeland security measures and education. More efforts also need to be done to prosecute those who engage in hateful rhetoric.

While President Obama has at times downplayed the strategic threat ISIS plays to global security, the multiple events in Turkey, France, and Belgium illustrate that ISIS poses a threat beyond the Middle East and critically, to the freedom and prosperity of global society. As Michael Weiss and Hassan Hassan argue in their new edition of ISIS: Inside the Army of Terror, ISIS is actively planning operations well beyond Syria and Iraq.

While the collapse of the Syrian and Iraqi states will be a long-term challenge (regardless of whether Russia and Iran can enshrine President Assad in the future of “Syria”), the ideology of ISIS and its extra-territorial focus extends will beyond its shrinking ‘state’s borders. In the short-term, the US and its NATO partners, in the wake of terrorist attacks in France, Turkey, and Belgium, should consider increasing military air and special forces operations to dismantle and destroy ISIS’ hold over Syrian and Iraqi territory.

It would be foolish to think that ISIS will only focus their sights on Europe or the Middle East. We already have seen ISIS-inspired or coordinated plots disrupted in the United States and Russia. We have witnessed as well ISIS’ terrorist attacks in the GCC and Egypt. President Putin’s “mission accomplished” moment this month in Syria naively shrouds the fact that Russia’s original goal, eliminating ISIS, was a job Putin never really took seriously and is fine leaving left undone. The time is now for more robust cooperation on defeating ISIS alongside Syria peace talks in Geneva.

In the longer-term, ISIS’s ideology and any of its successors’ who subscribe to it will not go away once and if ISIS looses its territory. This ideology requires robust, global cooperation to counter-it and denies it opportunities to take root. Saudi Arabia’s Deputy Crown Prince Mohammad bin Salman’s global coalition against extremism is an important step but one that needs to be followed up by more security cooperation and tangible commitments to make such a coalition effective. Beyond military means, this ideology can only be truly countered by education and the deepening capacity of states to respond to socio-economic challenges.

This day of horror underscored the resilience of the Belgian people and their European brothers and sisters to remain resilient and united. In this dark hour, Washington and European capitals can’t give into the fears that Marine Le Pen and Donald Trump seek to capitalize on and whip up for their own political advancement. It is the voices of cooperation, resilience, and bridge building that will bring the world together to address this extremism which hit both Brussels and Istanbul this month.

(*) Andrew Bowen, Ph.D. is the Director of Research at the Turkish Heritage Organization in Washington DC and New York City.

This article was originally published on Al Arabiya News. Read the original article. The views expressed in this article belong to the author and do not necessarily represent ForMENA