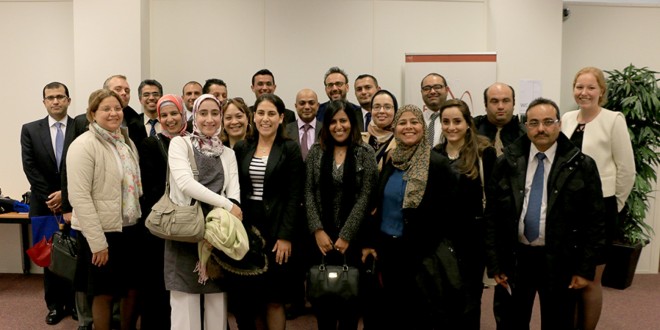 Brussels – The Council for MENA affairs « ForMENA » hosted on Wednesday the 7th of September 2015 at its headquarters in Brussels, a delegation of 25 Arab diplomats representing the ministries of foreign affairs, international cooperation and planning in the Arab Republic of Egypt, the Kingdom of Morocco, the Republic of Algeria, the Republic of Tunisia, the Hashemite Kingdom of Jordan, and the Republic of Lebanon.

On this occasion, ForMENA organized a seminar for the guest delegation on EU foreign policy and NGOs lobbying in the light of the changes that the Arab region is witnessing.

The seminar started with a presentation by ForMENA on the legal environment of the EU institutions and the role played by NGOs as a main component of the European political system and a historical overview about the emergence and formation of pressure groups and lobbies in Brussels and their impact on the decision-makers, as well as how they contribute considerably to the drafting of EU internal and external policies.

ForMENA’s strategy and the main activities that have been accomplished, as well as the role of ForMENA as a lobby NGO were tackled. ForMENA is a model that stems from the action and cooperation of a number of specialists and advocates on Middle East and North Africa (MEAN) issues for an effective and efficient contribution to reduce the intellectual and information gap between decision-makers in Europe and MENA region.

Then a discussion was opened during which the guests praised the pioneer and distinguished role that ForMENA is playing as one of the pressure groups, which advocate for MEAN issues inside Europe under the complicated atmosphere in the region. The guest delegation mentioned the necessity to develop ForMENA’ programs and tools so that it can constitute a citizen tribune for the Arab diplomacy in the European fora.

It is worth noting that hosting an Arab diplomatic delegation and organizing this seminar are the results of collaboration with the Netherlands institute of International Relations in the framework of the specialized capacity building training session that Netherlands Institute organizes for MENA diplomats with the support of the Dutch Ministry of foreign affairs. This activity is also part of the cooperation between ForMENA and many European organizations that are working on MENA issues.