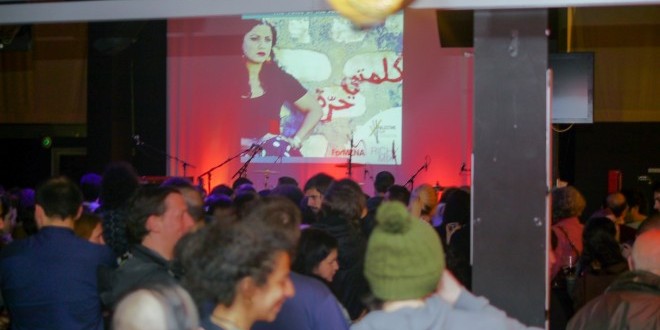 ForMENA Host a Festival of Arab Culture in London

On Saturday, 14th February, the Tunisian singer-songwriter Emel Mathlouthi performed atRich Mix in London’s East End. ForMENA was delighted to act as Emel’s main sponsor. In collaboration with the venue and the Palestine Film Foundation, ForMENA organised the concert as part of our ongoing efforts to support Middle Eastern and North African artists in bringing their work to a European audience.

Having risen to regional and international prominence with the Arab uprisings of 2011, Mathlouthi’s presence drew a sell-out crowd. The 600 or so people packed into the venue were treated to her unique style, which has evolved over recent years to include a range of electro and grunge elements alongside trademark melodic vocals.

The audience also got several tasters of the upcoming album, in which these newer elements are highly present.

After playing for well over an hour, Mathlouthi mixed with the crowd, signing copies of her most recent album and posing for photographs.

Before the gig, she sat down for an interview with ForMENA. Covering a range of musical, political and social issues, this will be published in full shortly.

Matholouthi emphasised the power of music to overcome barriers and change perceptions. Particularly in light of recent violence connected with the rise of the so-called “Islamic State”, she said that:

“With music and art, we can connect with each other anyway. Just as people across the world have seen different sides of western culture through exposure to western music, now we need to export our own music and art, to reject these negative and narrow – and plain wrong – clichés.

“The west is rejecting us [Arabs]. We need to show that we are talented and creative.”

Check our website for the full interview in a few days’ time and to keep updated with future events. As well as concerts and art exhibitions, ForMENA will be hosting a number of political talks over the coming months.