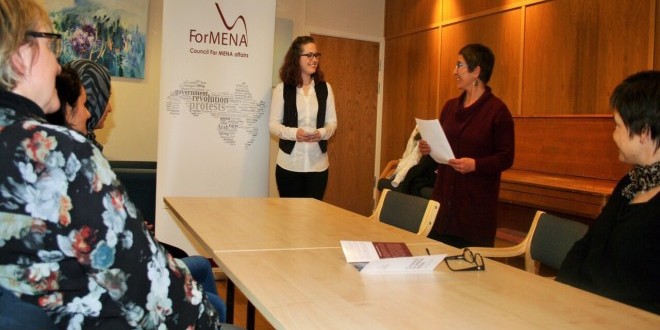 Council for MENA Affairs organised a celebration to commemorate International Women’s day in its Norway office on Sunday 8th March, 2015. The event was attended by a number of activists from civil society organisations. The celebration embodied one of ForMENA’s major goals: equality between men and women in all rights and responsibilities.

By hosting the event, ForMENA also worked towards another goal: furthering cultural integration and interaction between Arab women living in Europe and Norwegian women. This topic was introduced through discussion, with speakers and attendees exchanging thoughts to deepen understanding of, and appreciation for, one another.

ForMENA also gave a detailed explanation of its goals and the nature of its work, as well as its strategy. Mizgin Aziz Rashid, appointed by ForMENA to organise the celebration, introduced these subjects.

The event received a positive response from attendees, with many asking to be part of this important project – the first of its kind across Norway – and expressing their willingness and readiness to volunteer in any upcoming ForMENA activity.

Following Mizgin’s discussion, Andrea Lorenzen, a Norwegian activist from the friends of ForMENA, gave a talk entitled “What does International Women’s Day mean for women and the suffering of women in the Middle East?”.

Andrea spoke of the lack of attention given to women’s development and the spread of illiteracy among a large number of women in the MENA region, calling for pressure to be put on European governments to work to support women in terms of educational projects and cultural awareness.

The celebration also included a reading of Arabic poetry translated into Norwegian, which received a warm response from the audience.

Mr. Parviz Salimi, director of activities and networking in the Norway office of Council for MENA Affairs also participated in a ceremony held by the Red Cross for International Women’s Day, after being invited to represent ForMENA.