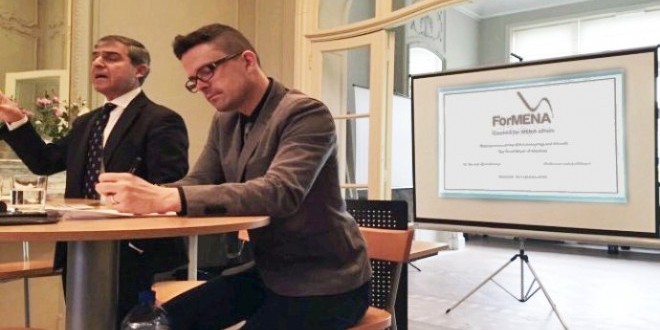 Conference on ISIS and the third wave of Jihadism

ForMENA’s first conference took place last Wednesday, February 25th, in Brussels. Professor Fawaz Gerges, reader in international relations and Middle East politics at the London School of Economics and renowned specialist in Islamist and other radical movements in the region, was hosted as the keynote speaker. Around fifty people, including members of European Parliament, External Service of European Union, European Commission, NATO, think tanks, academics and journalists, attend Professor Gerges’ presentation, entitled “ISIS and the third wave of Jihadism”. Speaking for over an hour, the Professor offered a series of extremely strong and relevant explanations on this new regional and world threat which affects our everyday life.

Emphasising that “the monster of ISIS” is above all a local threat with local, not global, objectives, Professor Gerges explained the reasons behind its birth. These included long-simmering religious sectarianism in the region, the collapse of Saddam Hussein’s Iraq in 2003 and the domination of a Shiite minority power over a Sunni majority population in Syria. Further contributing factors were the multiple errors of the United States which exacerbated local frustrations, the explosion of Al-Qaeda in the region in several small factions (as Fawaz Gerges predicted ten years ago), major economic and social crises in the Middle East caused by authoritarian powers monopolizing and hijacking the wealth of the region and its citizens, and the fragility of institutions and States since the Sykes-Picot agreement imposed border changes across the Middle East one century ago.

Professor Gerges continued by explaining that ISIS, now possessing the assets of a State, started from next to nothing: the group’s leader, Al Baghdadi, commanded only 200 to 300 men a few years ago. Today, he reigns over a population spread between Syria and Iraq of about 6 million people. ISIS is now endowed with colossal resources, drawn not only from oil income, but also the endemic corruption of local administrations – without which the Islamic State would not have been able to impose itself.

However, Gerges predicts that ISIS carries the seeds of its own self-destruction and is capable of  managing its resources only in the short-term – 6 months in the worst, 2 years at best. This is unlikely to be sufficient to sustain an “Empire” that needs huge quantities of money and resources to maintain the large numbers of fronts and battles in which it is involved: against the Kurds, against the Shiites, against the Christians, against a number of Western countries included in the anti-ISIS coalition, against Arab countries as Egypt and Jordan, etc.

In reality, more than a religious or cultural movement, the Caliphate crystallizes for professor Gerges all the frustrations of the Arab world for decades. It aims of course at demolishing the borders defined by western colonial powers within the framework of Sykes-Picot Agreements in 1917, more than destroying Israel or reconquering Jerusalem. Indeed, it would be more logical for ISIS to capture the holy places of Islam in Saudi Arabia and elsewhere. As largely a reaction to existing fissures, Isis cannot last in the long-term. Professor Gerges, while like everyone else predicting the worst for Syria and Iraq and aware of the unfolding tragedy, imagines the downfall, rather than the consolidation, of ISIS. Indeed, it could suffer the same fate as Al-Qaeda, the focus of so much of the United States’ “War on Terror” since September the 11th, 2001. With that organisation’s capacity severely diminished, is ISIS next?