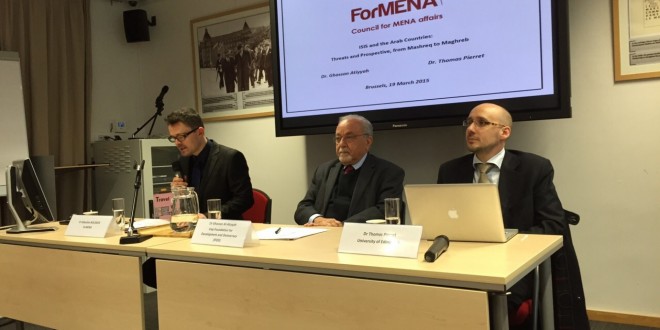 Conference on ISIS and the Arab Countries: threats and prospective, from Mashreq to Maghreb

Council for MENA Affairs (ForMENA) held a conference entitled “ISIS and the Arab Countries: threats and prospective, from Mashreq to Maghreb” in Brussels on Thursday 19th March, 2015. The event coincided with the European leaders’ summit in the Belgian capital.

To kick off the conference, Sébastien Boussois, policy advisor for ForMENA, welcomed the attendees and started by introducing ForMENA’s goals and activities across Europe. Sébastienthen welcomed ForMENA’s guest speakers: Dr. Thomas Pierret, Lecturer in Contemporary Islam and Islamic and Middle Eastern Studies, University of Edinburgh, and Dr. Ghassan Al-Atiyah, Director of the Iraq Foundation for Development and Democracy (IFDD).

The conference was attended by about 40 representatives of active political institutions in Brussels, including official representation of the Belgian Foreign Ministry, members of the European Parliament, representatives of diplomatic corps of Arab and European countries, and media and press presence.

Dr. Pierret covered the territorial control, strategy, locations and roots of ISIS control across Syrian and Iraqi territories and explained the genesis of ISIS and its split from Al-Qaeda, as well as mapping the jihadist organisations active in Syria and Iraq.

Dr Al-Atiyah’s emphasised the importance of cooperation with Sunni powers in Iraq if the military operations against ISIS are to succeed. Dr Al-Atiyah also spoke of Iran grabbing the opportunity for further influence and penetration in Iraqi political and military life through coordinating its support explicitly with the Iraqi government and indirectly with the American administration, in order to support the Popular Mobilization Forces (Shia armed militias) to face ISIS.

Dr Al-Atiyah also gave a detailed explanation on the reasons behind the growth of the sectarian war, how to approach it and the benefit to be gained the experiences of previous conflicts in the Arab region.

Note: ForMENA will publish the key points of Dr Al-Atiyah’s speech in both Arabic and English under the “Our Voices” section of the website.